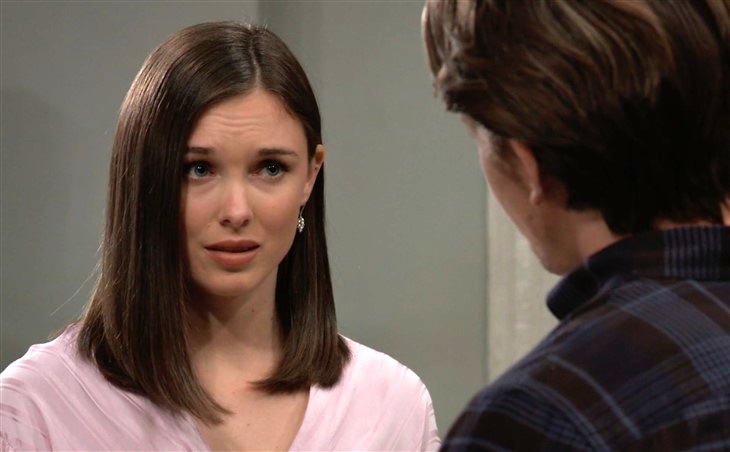 General Hospital spoilers reveal that Willow Tait (Katelyn MacMullen) tells Michael Corinthos (Chad Duell) that she is in the relationship for the long haul. However, that is usually said right before an explosive breakup. Could Michael get worse and turn into someone Willow doesn’t recognize anymore?

GH spoilers reveal that most people in Port Charles hate Nina Reeves (Cynthia Watros) for what she did. Nina kept Sonny Corinthos’ (Maurice Benard) true identity from him for nine months. Sonny’s family and friends, including young children, had to grieve. Some terrible things happened as a result of Sonny not being around. Plus, Nina did everything she could to keep the truth from coming out while getting romantically involved with Sonny.

Michael made a deal to make sure that Nina got arrested for identity fraud. While his anger is understandable, he’s quickly turning into someone Willow doesn’t quite recognize. However, the two talked about Michael not even discussing his decision with her. In Willow’s mind, she hopes that it was just a one-time thing and Michael is still the man she fell in love with.

General Hospital spoilers reveal that on Wednesday’s episode, Carly Corinthos and Michael were asked to meet Sonny privately. Willow wasn’t invited to the conversation, which she assumed was a family matter.

However, as Wiley Quartermaine-Corinthos’ (Caleb and Kyler Ends) mother, it did involve her. Michael will make decisions regarding Ms. Wu’s (Lydia Look) request to Sonny that directly impact Wiley. However, Willow was left out of that conversation, which is something she won’t like at all. This alone won’t break up the couple, but they could end based on Michael’s decisions in the next few weeks.

This is just another sign that there will be more decisions Michael will make. The character has a taste of what it feels like to have power and actually use it. So, he likely won’t stop there, especially as he finds more people who cross him or who he believes deserve to be punished. It’s one thing to have power when it has to be used. It’s quite another to be irresponsible with it.

This storyline isn’t just about what Michael did, though. It’s the change in Michael’s entire personality, how he speaks and how he presents himself. Micahel is not the same man that Willow fell in love with. Willow might even realize that she’s sleeping with a complete stranger. What Michael does next could not only cause a conflict in his relationship, but could end it. The question is what does this mean for Wiley? What kind of path is Michael going down and can he find a balance between his two selves?