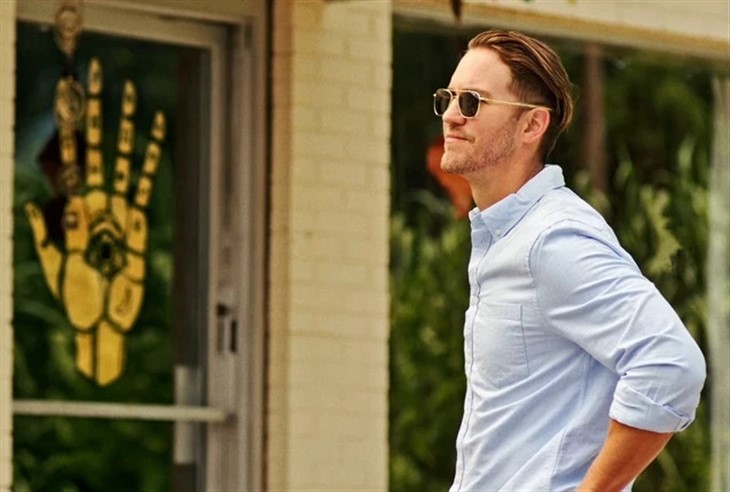 General Hospital (GH) spoilers tease that Wes Ramsey may not be done with Peter August’s villainous villainy just yet – he posted a big thank you on Instagram recently, thanking General Hospital fans for a fantastic four years as Peter, and promised to continue shaking trees and stirring up controversy!

General Hospital Spoilers – Alas, Poor Peter August, We Thought That He Was Gone!

General Hospital viewers will recall that for several days, a huge buildup to what General Hospital fans had thought was the end of Peter took place, working backwards from an unconscious and bleeding Peter at the bottom of a flight of stairs to the reveal that an enraged Dr. Hamilton Finn (Michael Easton) threw him down them!

General Hospital viewers were shocked after Finn and Nurse Elizabeth Baldwin (Rebecca Herbst) checked his pulse and called him dead, even hiding his body in a large morgue freezer, that he turned up alive a couple of months later! The freezer had been in Helena Cassadine’s (Constance Towers) old lab underneath the hospital, and the only clue he had survived was a scene that was assumed to be a hallucination on Elizabeth’s part, seeing a bloodied Peter walking towards her on the roof of General Hospital, where the only elevator down to the sub basement was located!

General Hospital viewers will recall that Peter August arrived in Port Charles four years ago, and Wes Ramsey thanked his fans for the privilege of bringing the character of Peter August into what he describes as the magical world of Port Charles for the very first time. Wes describes his time as Peter as being an honor, but also a roller coaster for him ever since.

He thanks all the General Hospital vans that have stuck by him, the ones he has won over from time to time, and those that he’s still working on winning over as well. Wes comments that it has been one of the great privileges of his life to perform for his fans and trying to keep them entertained over the past four years. Then he makes a comment that seems like a toast – to keeping the controversy stirring and still shaking the trees! His real life longtime live in girlfriend Laura Wright, who plays Carly Corinthos, commented “Keep kickin’ ass baby”!

General Hospital viewers who follow Wes on social media will remember that he wrote a similar post on Instagram shortly before the staircase tumble that was thought to have killed Peter aired! His thank you’s led readers to believe that he was exiting his role as Peter August, but a few weeks later General Hospital viewers found that wasn’t the case, although he had taken some time off. Now, what viewers are wondering is if this post is a goodbye post or a indication that he’s staying on as Peter!

Longtime General Hospital viewers will recall that Helena Cassadine was a villain who died many times only to reappear alive again – and so was Peter August’s father, Cesar Faison (Anders Hove). On a show like General Hospital, unless viewers see a character on a different type of staircase – like the one AJ Quartermaine (Sean Kanan) ascended to heaven with loved ones who had gone on before beckoning him – it can usually be expected that no matter how a character “died” they’ll be back! Peter may be the new Helena!