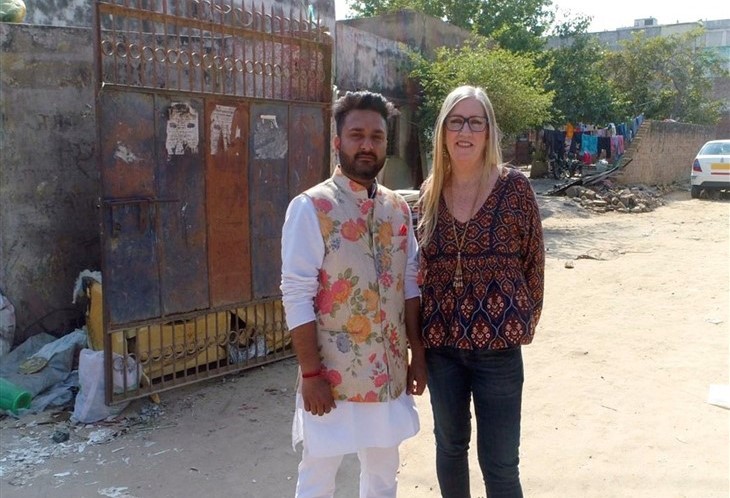 90 Day Fiance: The Other Way Season 3 spoilers reveal that Jenny Slatten and Sumit feature a lot. Actually, his mom and dad moved in with them. So, his mom Sadhna seems determined to teach her how to be a real traditional housewife. Additionally, she teaches her some other things like Yoga. Fans hate that it seems like such a humiliating experience for Henny. However, they also wonder if TLC makes India look much worse than it really is. Of course, that could be an impression they give to add drama to the show.

Right now, TLC fans talk about Jenny being a slob in her kitchen. However, some folks hoped she wasn’t as bad as the show made out. Recall, Sadhna was quite insulting to her, and Sumit made a big deal about her tidying up the place. While some people really enjoy the drama as they can take to their keyboards and make memes, others think it’s very embarrassing for Jenny. A lot of people urge her to give up. In fact, it seems obvious to fans Sumit probably never marries her.

The October 31 teaser showed poor Jenny being instructed in Yoga. Sumit’s mom seems advanced, but fans hated that she went on about Jenny’s age. Loyal 90 Day Fiance fans seem sick and tired of her always slipping in the knife about Jenny being much older than Sumit. Well, that could all be drama just to rack up the interest of fans. After all, several cast members spoke out in the past about staged scenes. This week, a post surfaced on Reddit about the subject of making India look worse than it is in other ways.

Redditor u/TheOne82 posted up the intro photo for Jenny and Sumit. The caption read, “I don’t know how it really is in India, or their neighborhood, but this is a pretty bad backdrop.” Well, think back to Season 1 of The Other Way. In the original show, Tiffany Franco and Ronald were featured in South Africa. In that intro, the clip always showed miles of tin shacks and really run-down areas. South Africans felt upset as not ten minutes away are beautiful, modern suburbs. In fact, the place teems with malls, parks, great entertainment, and more. So, fans felt that TLC opted for the worst footage to rack up drama.

Is TLC doing the same thing with India on 90 Day Fiance: The Other Way? As some folks pointed out, Sumit’s mom and dad don’t live in a slum. So, probably, where they stay is quite a nice suburb in Dehli. However, a lot of people who visited India seemed to agree that in a way, India is rundown. One street might be really nice. However a block way, it looks similar to the intro pic that TLC uses. Actually, in 2015, the South Asia correspondent for the  New York Times, Gardiner Harris, was scathing. He wrote about how the place is literally disgusting with all of the pollution.

First Post reported that Indian people reacted furiously to the criticism by Harris. For some 90 Day Fiance fans, they can’t understand why Jenny would want to live there. One fan wrote on Reddit, “I spent a few months traveling around India. This is typical. There are nicer neighborhoods of course, but this is the way a lot of places look.” Nevertheless, as another person noted, “Been there 4 times, multiple cities each visit. There are a lot of areas like this, but they sure as hell could have found a better place for this.”

Another TLC follower reminded fans, “TLC does this sh*t a lot in the foreign countries. They will always show the worst parts of the foreigner’s home, city, village, etc. Remember Rose? Did they really have to zoom in on the dead rat? Really?”

Be sure to catch up on everything happening with the TLC franchise right now. Come back here often for more 90 Day Fiance: The Other Way Season 3 spoilers, news, and updates.