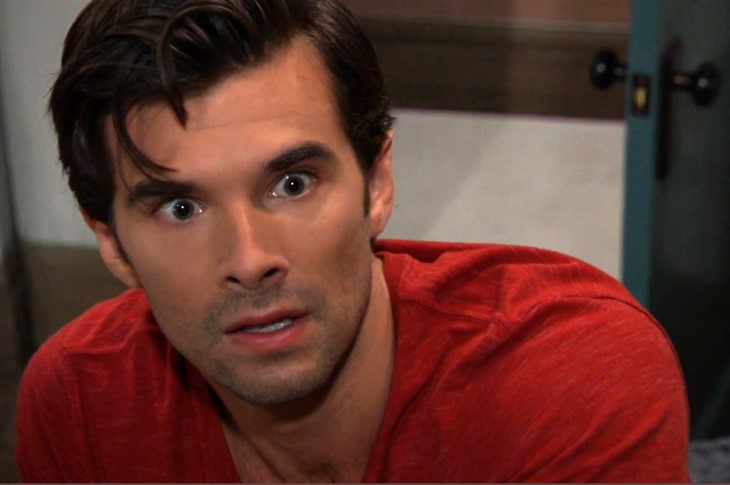 General Hospital (GH) spoilers for Wednesday, August 4, 2021, reveal in Port Charles, NY, Chase having to decide how he is going to handle Michael and Willow’s ultimate betrayal.

Thankfully, Austin (Roger Howarth) stopped Chase (Josh Swickard) from literally walking in on Michael (Chad Duell) and Willow (Katelyn MacMullen) doing the deed in bed and only has evidence from Michael’s shirt and belt — plus what he overheard in the other room. It’s clear that Austin wanted Chase to know what Willow and Michael were up to because now Michael has a brand-new enemy he doesn’t even know about.

When Austin asked Chase what he plans to do with this new knowledge, Chase looked furious and understandably so. On Wednesday, he tells Willow and Michael that he has something to say to them and something tells us he is going to play them for fools and thank them with how kind they have been to him — while not revealing that he can once again walk. Go for it, Chase.

Elsewhere in the Q mansion, Monica (Leslie Charleson) shocks Carly (Laura Wright) when she tells her she supports the idea of her marrying Jason (Steve Burton). We also have Brook Lynn (Amanda Setton) having it out with Valentin (James Patrick Stuart) and questioning his motives for finding Maxie’s (Kirsten Storms) baby.

It also looks like a recent guest at Monica’s house is only allowed out during the day because Harmony (Inga Cardranel) is with Alexis (Nancy Lee Grahn) in jail on Wednesday.

General Hospital Spoilers  – Trina Robinson And Portia Have It Out

Trina (Sydney Mikayla) is still devastated after learning that her mother and Curtis (Donnell Turner) had an affair long before any of them ever moved to Port Charles. After a talk with Spencer (Nicholas Chavez), Trina decides to hear Portia (Brook Kerr) out, but she has to ask her one thing — has she been in love with Curtis all this time? Portia doesn’t quite know what to tell her daughter.

Meanwhile, Stella (Vernee Watson) spills all to Curtis and tells him how she was chastising Portia and Trina overheard that he and Portia had an affair years ago. Does she bother telling him she also swiped those divorce papers? Stay tuned to General Hospital weekdays to see how these stories play out.