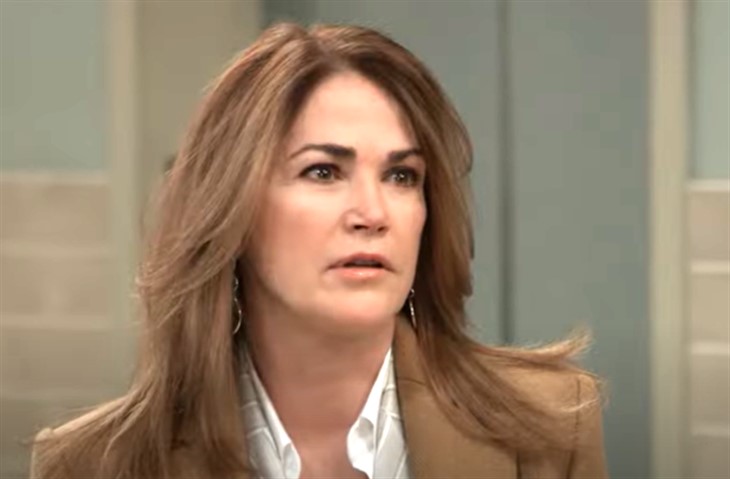 General Hospital (GH) spoilers tease that Willow Tait (Katelyn MacMullen) believes that Harrison Chase (Josh Swickard) is running out of time. While it seemed that Dr. Hamilton Finn (Michael Easton) had a breakthrough and had created a cure for the poison that Peter August (Wes Ramsey) gave Chase, the serum he created only made Chase worse.

And while Finn will soon realize that the serum didn’t work because it needed DNA samples from both of Chase’s biological parents and at the moment, Finn incorrectly believes that he is Chase’s father. Finn had only recently looked into Chase’s paternity and a paternity test confirmed that Finn was Chase’s dad. But as is common in Port Charles, the test Finn had run on General Hospital was altered!

General Hospital spoilers and recaps reveal Cyrus Renault (Jeff Kober) vowed to get revenge on Chase’s mother Jackie Templeton (Kim Delaney for helping Cyrus’ brother Martin Grey (Michael E. Knight) locate their mother. Jackie was successful so Martin allowed Jackie to interview Florence Grey (Annie Abbott). Jackie’s article was printed in the Invader and exposed Cyrus as a criminal in the eyes of his own mother.

Cyrus was quite unhappy at the damage the article did to his reputation so he planned his revenge on General Hospital. He discovered that Hamilton Finn had the test run, so Cyrus changed the results to read that Finn is Chase’s father when Gregory actually is.

But until Finn realizes that the serum just needs to be altered to use Gregory’s DNA instead of his, he had a serious conversation with Chase. Finn laid everything out, and Chase was told that would soon die, although Finn couldn’t provide an exact timetable. Not wanting to waste another moment, Chase proposed to Willow on General Hospital, and since she believed Chase was going to die, Willow accepted in order to make Chase’s last days as happy as possible.

But it won’t be long before Willow begins to have second thoughts. GH spoilers show Willow is actually in love with Michael Corinthos (Chad Duell) and won’t want to hurt him. In addition, Willow will worry that she is doing more harm than good by not telling Chase that doesn’t feel the same way about him that she used to. An observant Jackie will notice that Willow is hesitant and will warn her not to ruin Chase’s last days. Jackie will even suggest that they marry immediately. So look for Willow to become Chase’s wife just as Finn finally gives Chase the correct cure.

Will Finn realize that the reason the cure failed was that he used the wrong DNA? Will Finn have time to create the corrected formula? Knowing that Chance will have a better chance of surviving if he stays in good spirits, will he suggest that Willow marry Chase right away. Will Jackie realize that Willow loves Michael and manipulate her into not backing out in order to keep her son alive?

This would be the second time Willow has agreed to marry for reasons other than love, so stay tuned to General Hospital airs weekdays on ABC, and don’t forget to check back right here regularly for all your General Hospital news, information, and spoilers.