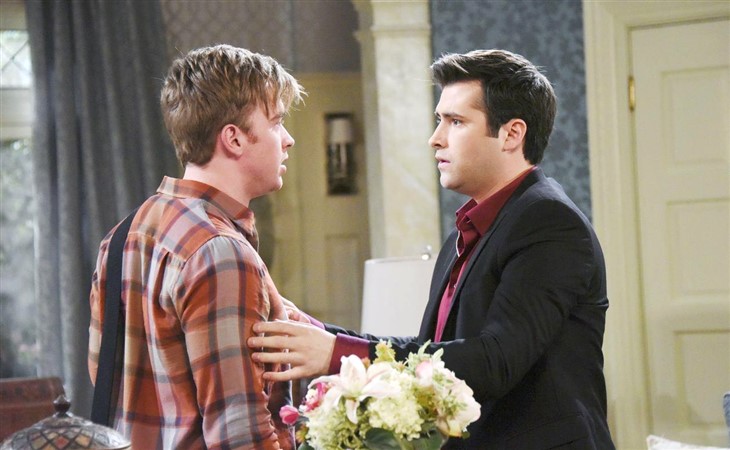 Days of Our Lives (DOOL) spoilers reveal that Will and Sonny will be making an appearance on the new Peacock steaming DOOL spin-off Days of Our Lives: Beyond Salem. But this time Sonny Kiriakis will be played by former The Young and the Restless star Zach Tinker rather than Freddie Smith, who originated the role. After the short spin-off series airs, should Will and Sonny make a return to Salem for good? You tell us!

Days Of Our Lives Spoilers – Why Did Will Horton And Sonny Kiriakis Have To Leave?

Will (Chandler Massey)had just decided to adopt a child when Sonny got a job offer in Arizona and the pair decided to leave town with their daughter, Ariana. It was a shock to Gabi (Camila Banus) that her daughter would be leaving with her two dads, but off they went with Will making a brief visit for the 2020 holidays.

Their departure was abrupt and it made no sense that the show would write an adoption story for them and then not follow through. Yes, Allie (Lindsay Arnold) decided not to give them her baby, but that didn’t mean they still couldn’t adopt. In addition, an adoption story with a same-sex couple could have been interesting but DOOL decided to abandon it for some unknown reason.

DOOL Spoilers – Justin Kiriakis Needs One Of His Kids Around

With Justin (Wally Kurth) planning to marry Bonnie (Judi Evans), who looks exactly like late wife, Adrienne, you’d think one of Justin and Adrienne’s four sons would want to be there and see if their father is doing the right thing or just trying to find an almost-exact replacement for their mother. Sonny is the only one of their kids we have met as an adult and it would make sense for Sonny to be in Salem.

It would also make sense for Will to be in Salem now that most of his siblings will be there. Allie is already established and Johnny will be returning to town after the Olympic break. If Will were to return, all we’d need is Sydney to have drama from all of Sami’s (Alison Sweeney) offspring and we all know any offspring of Sami is bound to be interesting. So, should Will and Sonny make a permanent comeback? You tell us in the Days of Our Lives poll below.