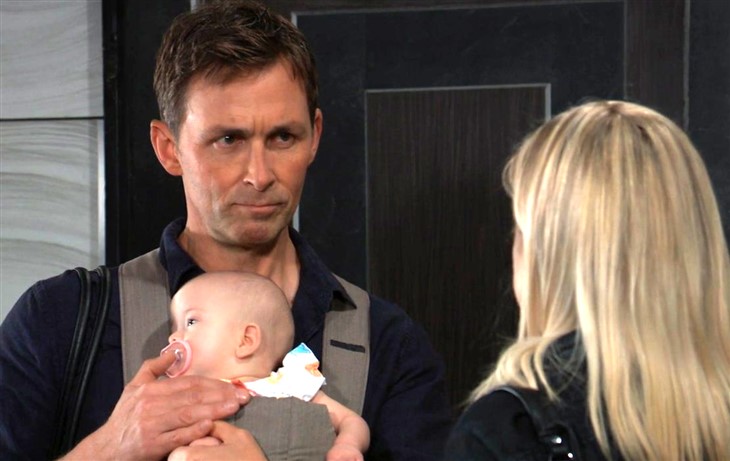 General Hospital (GH) spoilers reveal that Peter August (Wes Ramsey) showed up at the Tan-O in Nixon Falls. The villain admitted to searching for his baby under the radar, which led him to Maxie Jones (Kirsten Storms). Peter could take Bailey Quartermaine (Scarlett and Harper Bloom), which might force Maxie to admit the first kidnapping was all a lie.

GH spoilers reveal that Peter showed up in Nixon Falls as Maxie was leaving. The villain followed Maxie to the Tan-O, where Peter found Nina and Sonny Corinthos aka “Mike” (Maurice Benard). He would have followed Maxie back to Port Charles but wanted answers about Sonny. He quickly discovered that Sonny has amnesia and wanted to know if it was permanent. Of course, Nina has no idea and told him so.

Peter immediately found an opening to coerce Nina into doing what he wanted. Right now, his request is a place to stay to serve as his home base of operations. Peter also wants all the information Nina can get about Louise “Lou” August. It doesn’t appear that Peter knows that “Bailey” is actually Lou. At least, he doesn’t right now but that could change in the next few weeks.

General Hospital spoilers reveal that Maxie has no idea that Peter has been watching her. That makes it even riskier for her to keep seeing Bailey. At some point, Peter will figure out that Louise and Bailey are the same child. Peter will be infuriated and will either take the child himself or perhaps force Nina to do it.

If Peter ends up kidnapping Bailey, Brook Lynn Quartermaine (Amanda Setton) and Maxie will need to confess that the first kidnapping report was a lie. Even if Nina doesn’t tell Maxie or anyone else about Peter, who else would take Bailey? Brook Lynn and Maxie are immediately going to know that Peter is involved.

Perhaps when Valentin Cassadine (James Patrick Stuart) told Maxie about the development — that he’s certain Peter has already found Louise — it might have been a foreshadowing. If Peter ends up with the child, then how will Maxie ever get her back? Peter seems to have an unlimited amount of money and resources, so he could disappear with baby Lou forever. There will be absolutely no way for Nina to come back from this or get redemption unless she tells the truth immediately. We will have to keep watching the ABC soap to see how this storyline develops. In the meantime, tell us what you think is going to happen.

90 Day Fiancé: The Other Way Star Ariela Defends Decision To Invite Ex-Husband Into Her Home