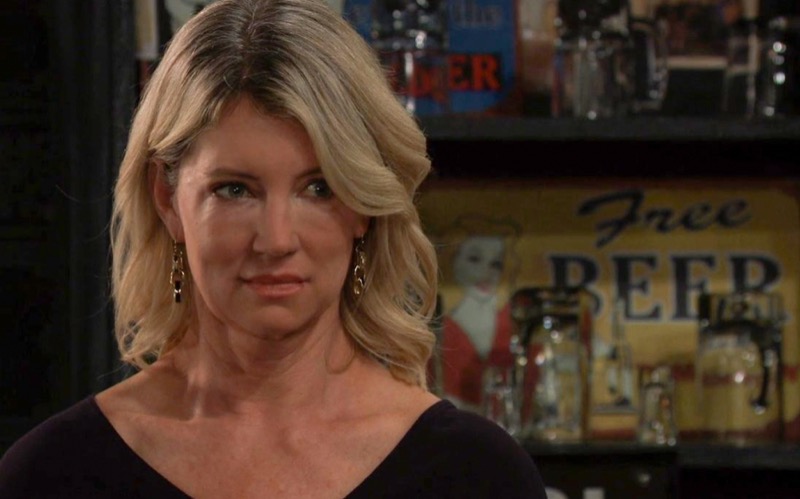 Peter Too Nina By Surprise

General Hospital’s Peter was supposed to be dead and so was Sonny. Suddenly, after seeing Maxie leave the Tan-O, Peter approached Sonny who didn’t recognize him. Sonny introduces Peter to Nina who is stunned by his visit. Peter covered and told Nina what name he had given Sonny. Then Sonny left to see Phyllis Caulfield (Joyce Guy) leaving Nina alone with Peter. Sonny has no idea of the connection between Nina and Peter. Sonny has no idea what Peter did to his best friend Jason Morgan (Steve Burton). If Sonny had remembered Peter, he would have never left the two of them alone. However, Sonny being there has given Peter ammunition to use against Nina that could lead her to betray Maxie Jones, but will she?

Peter Could Threaten To Make A Call

General Hospital’s Peter wants access to Maxie. Peter believes he and Maxie are supposed to be together and had planned to kidnap her and their child. Nina could slip up and say something about the baby surviving and Peter could demand she help him. Would Nina tell Peter where Maxie’s baby is to keep Peter from revealing Sonny’s existence? Could Nina expose that baby to Peter’s evilness to continue to live her fake life? Nina has seen how far Peter will go to keep Maxie. Nina knows that Valentin would be blindsided by a reveal about the baby. Will Nina reveal Maxie’s secret?

If General Hospital’s Nina reveals where Maxie left the baby, Maxie would never forgive her. Maxie placed her daughter with Valentin Cassadine (James Patrick Stuart) and Brook Lynn Quartermaine (Amanda Setton) to keep her safe. Nina’s secret should not be worth putting Maxie’s daughter in danger. However, Nina is desperate to keep Sonny to herself and would sacrifice anyone to make that happen. After all Nina has been keeping Sonny away from his entire family including their shared grandson. Nina has proven that she cares about no one but herself or she would have helped Sonny to get home by now. How much further will Nina go to keep her secret?

Nina may soon be faced with a huge decision about her relationship with Sonny. Will Nina tell Sonny the truth before someone else does? Will Peter tell Sonny everything because Nina won’t cooperate with him?

DOOL Spoilers: Chad DiMera Is Ready To Give Up On Abigail