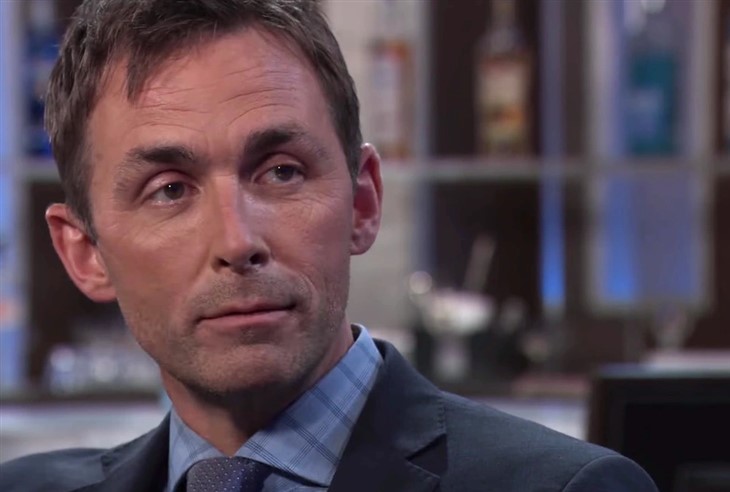 General Hospital Spoilers tease that for years Valentin Cassadine (James Patrick Stuart) believed he was the son of Mikkos Cassadine (John Colicos), but not all that long ago, he discovered that wasn’t true. While he is definitely Helena Cassadine’s (Constance Towers) son, his father has remained in question. But all that will soon change now that Victor Cassadine (Charles Shaughnessy), Mikkos’ brother is making himself known once again. Helena most likely had an affair with her husband’s brother, which produced Valentin.

General Hospital Spoilers – Valentin Cassadine Has Tuned Over A New Leaf – For The Most Part.

Valentin has been said to be ruthless and evil, but in recent years, he has mellowed. First he fell in love with Nina Reeves (Cynthia Watros). And although he did some underhanded things in order to keep her, she certainly brought out a different side of the complicated man. But what really changed Valentin was his daughter, Charlotte Cassadine (Scarlett Fernandez). Charlotte witnessed Valentin attempt to kill Ava Jerome (Maura West). Realizing he wanted to be a better man for his daughter, Valentin has embraced his kinder side. And he has done just that, although the revelation that he isn’t really the father of Brook Lynn Quartermaine’s (Amanda Setton) may set Valentin on the course his father has taken.

GH Spoilers – Will Finding His Father Cause Valentin Cassadine To Return To The Dark Side?

But Victor is a psychopath, and he is responsible for kidnapping Dr. Leisl O’Brecht (Kathleen Gati) who he claims to love. And he’s most likely the person holding Drew Cain (Cameron Matheson) prison and working with Peter August (Wes Ramsey). While Valentin will certainly want to get to know his father, he risks returning to his evil ways once he discovers his true parentage.

GH Spoilers – Can Anna Devane Save Valentin Cassadine From Himself?

While Valentin may find himself falling back into his old way, thanks to Victor, there is one thing that might keep him from fully embracing that path. Valentin and Anna DeVane (Finola Hughes) have grown closer. In fact, Valentin hasn’t really ever stopped loving the WSB agent. If Anna declared his love for her former nemesis, it might be exactly the reason Valentin will choose good over evil. He may even be instrumental in Victor’s eventual downfall!

Is Victor Valentin’s true father? How will Valentin react to finding his heritage finally? And can Anna save Valentin from the worst parts of himself? Anything can happen in Port Charles so stay tuned to General Hospital airing weekdays on ABC. And don’t forget to check back right here regularly for all your General Hospital news, information and spoilers!