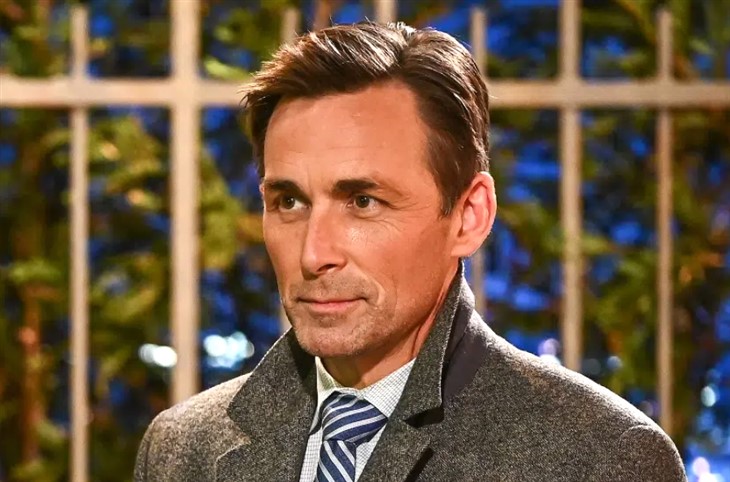 General Hospital Spoilers tease that Valentin Cassadine (James Patrick Stuart) is currently living at the Quartermaine mansion because his newborn baby by Brook Lynn Quartermaine (Amanda Setton) is there. But as viewers know, the baby isn’t really his. It isn’t even Brook Lynn’s! Brook Lynn and Maxie Jones (Kirsten Storms) struck a deal.

GH recaps reveal Maxie gave Brook Lynn her baby to pass off as her own in order to protect the little girl from her criminal father, Peter August (Wes Ramsey). While Valentin may understand the need for the deception, that doesn’t mean that Brook Lynn or the rest of the Quartermaine’s will get off easy.

Brook Lynn passed off Maxie’s baby as hers and Valentin’s in order to secure her shares of ELQ that Valentin had tricked Brook Lynn into giving up. He set her up with a slimy recording manager who also made unwanted sexual passes at Brook Lynn. He refused to let her record new music or even perform unless she gave him her ELQ shares.

According to General Hospital spoilers, Brook Lynn did exactly that and that allowed Valentin to take over ELQ at it’s CEO. There’s no doubt that Valentin is good at business and ELQ has done well under his leadership. But the family still wants to take back control.

GH Spoilers – Valentin Cassadine Is A Dangerous Enemy To Have!

Once Valentin learns the truth, he will seek to get his revenge. If he retains the CEO position, there is nothing to stop him from destroying ELQ from within. And if the shareholders do vote him out, he’s going to find ways to make the entire family pay. He will make life a living hell for Brook Lynn and will likely try to form a company all his own to rival the Quartermaine’s and eventually take it down, brick by brick if he has to. Hopefully, Valentin will remember that Brook Lynn only deceived him after he had done the same to her.

Will Valentin be understanding once the truth comes out and he finds out he isn’t a father once again? Will he seek revenge on Brook Lynn and the rest of the Quartermaines. Will he find a way to destroy ELQ once and for all? Anything can happen in Port Charles, so stay tuned to General Hospital airing weekdays on ABC. And don’t forget to check back right here regularly for all your General Hospital news, information and spoilers!