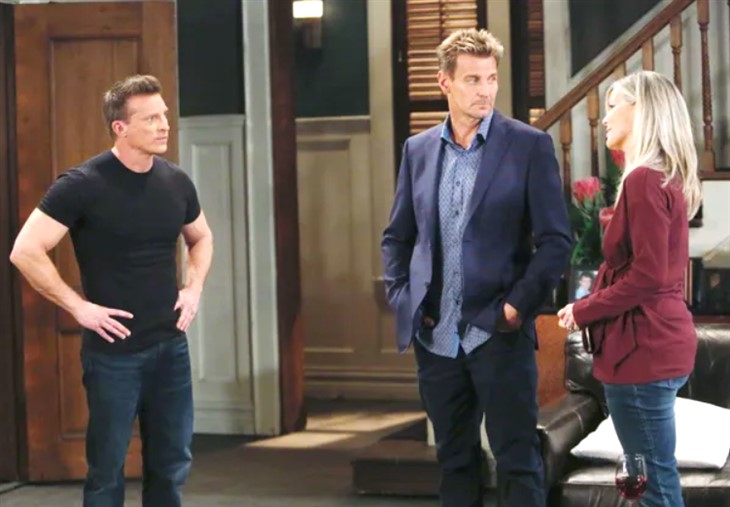 General Hospital viewers will recall that thanks to the danger posed by Joey Novak (Patrick Zeller) and the rest of the Novak family to the Corinthos family, Jason Morgan (Steve Burton) and Carly Corinthos (Laura Wright) decide to escalate their wedding plans. Because of potential danger to Josslyn Jacks (Eden McCoy) and pressure from her father, Jasper “Jax” Jacks (Ingo Rademacher) they make plans to marry much sooner than they previously planned. However, Carly will get some wedding jitters because of the rush, and General Hospital viewers will recall from last week’s episodes that she isn’t quite ready to fully move on from her presumed dead husband Sonny Corinthos (Maurice Benard)!

General Hospital viewers will recall that Jax doesn’t really trust that Jason can keep Josslyn safe from the mob. Jax doesn’t like that Josslyn has become so familiar with mob life that she doesn’t mind having bodyguards! General Hospital viewers know that is not the normal life of a teenage girl, and Jax will continue to fight for her safety. He will find an unexpected ally in Liesl Obrecht, (Kathleen Gati) probably because Jason’s perceived mistreatment of her own daughter, Britt Westbourne (Kelly Thiebaud) has sullied her opinions of Jason! Just because the Novaks have failed to go after Britt, it doesn’t mean they won’t if they realize she’s important to Jason in spite of his marriage to Carly!

General Hospital viewers will recall from last week’s General Hospital that Nikolas Cassadine (Marcus Coloma) has figured out that his own son, Spencer Cassadine (Nicholas Chavez) is behind the fearful stalking incidents that have frightened Ava Cassadine (Maura West) into seeking a divorce! Spencer staged a “rager” of a party for his “townie” friends Cameron Webber, (William Lipton) Trina Robinson (Sydney Mikayla) and Joss, along with some cool Euro friends. However, Spencer will be even more upset with his father when he crashes the party in a creepy hooded costume, and exposes his son as the stalker in front of his friends! Spencer will also get a call from “Ryan” during the party, which will either be Nikolas using a voice altering device or possibly Kevin Collins (Jon Lindstrom) agreeing Spencer needs to be taught a lesson, although it’s more likely to be a voice altering device. Kevin knows that fear is not a good teacher! Trina will be supportive of Spencer in the aftermath, and Laura Collins (Genie Francis) will have some lessons of her own for Nikolas!

GH Spoilers August 16-August 20 – A Voice From The Past

General Hospital viewers will see Sam McCall (Kelly Monaco) be blindsided by a voice from the past as her presumed dead baby daddy Drew Cain (Cameron Mathison) calls her for help! She’ll ask her former private investigation company partner and good buddy of Drew’s Curtis Ashford (Donnell Turner) for help finding him.

General Hospital viewers will see another helper step up for Sam in Anna Devane (Finola Hughes). Anna knows that the missing Peter August (Wes Ramsey) is responsible for Drew’s disappearance, so when she hears Drew may be alive, she’ll be glad to help. Sam also wonders what a future with Dante Falconeri (Dominic Zamprogna) might look like, since there is no guarantee they can find Drew and rescue him and the Jasam ship seems to have sailed! General Hospital viewers know Sam will undoubtedly remember that when she was with Drew things were a lot safer, though!

General Hospital viewers will recall that Maxie Jones (Kirsten Storms) left Port Charles to clear her head with family in Texas, and this week she returns-but not without complications! Seeing Bailey Lois Quartermaine/Louise August (Harper and Scarlett Bloom) won’t be any easier than when she left. General Hospital viewers will also see Maxie have a difficult and emotional confrontation with Valentin Cassadine (James Patrick Stuart) over “Bailey”. She’ll try to distract herself by trying to help Carly with her impending wedding, but that won’t help because Carly will get another case of wedding jitters which Jason will have to calm her down from.

General Hospital viewers will see Carly and Jax trying to get a piece of peace for Josslyn’s sake, and Joss will take notice. However, General Hospital viewers will also see Joss discuss all the current conflict with Jason, and Carly may suspect that some old feelings for her are bubbling up in Jax. Jax is focusing on Josslyn, but he doesn’t seem to like the fact that Carly is “moving on” with Jason! Meanwhile, Willow Tait Chase (Katelyn MacMullen) finally gets up the nerve to break things off with Harrison Chase (Josh Swickard) and tell him the truth. However, as General Hospital viewers will recall, he already knows the marriage to Willow is a sham, and he’ll tell her that he knows she’s been cheating on him with Michael Corinthos (Chad Duell). Chase intends to be the dump-er, not the dump-ee!

General Hospital viewers will also see Nina Reeves (Cynthia Watros) see an unexpected face in Nixon Falls, Pennsylvania. A leaked script shows that Jax will head up there to support her in the aftermath of Lenny Caulfield’s (Rif Hutton) death, but there may be a different familiar face that catches her off guard; one that’s not so welcome! Sonny Corinthos aka “Mike” (Maurice Benard) makes the acquaintance of a new face in Nixon Falls. General Hospital viewers know that cannot be Jax, but it sounds like Nina recognizes that new face also. This may be the unwelcome guest who backs her into a corner – and she’ll make a desperate call for help.

She may call Valentin Cassadine (James Patrick Stuart) for help – especially if the “new face” is Peter, who would definitely be unwelcome! General Hospital viewers will recall that the day Peter supposedly died on the stairwell of General Hospital, he told Anna he’d sold “The Invader” to an investor. Elijah Crowe (Dan White) may have been that investor, so even though Elijah is in jail for fraud, he might be Peter’s connection to Nixon Falls. Dr. Hamilton Finn (Michael Easton) will get a pleasant surprise, but if it’s confirmation Peter’s alive it may be a pleasant surprise combined with an unpleasant shock! As for Spencer, another victim of an unpleasant surprise, he’ll go visit Alexis Davis (Nancy Lee Grahn) in Spring Ridge Prison.