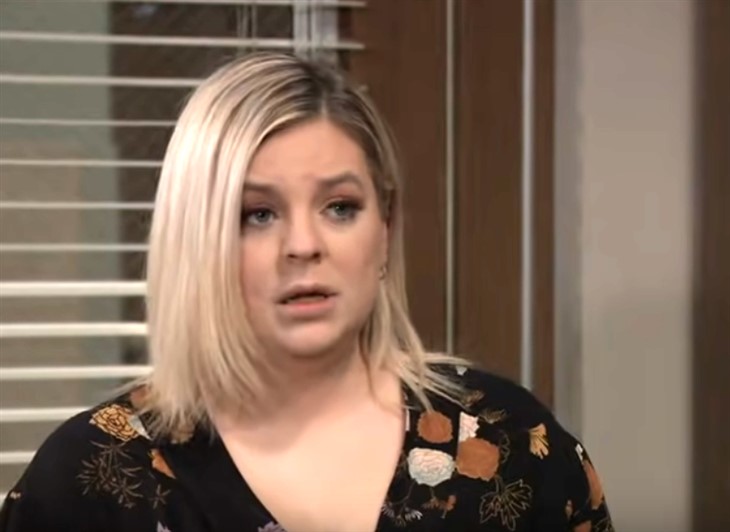 General Hospital (GH) spoilers tease in this week’s General Hospital Sneak Peek, that it is becoming more and more difficult and complicated to keep up the ruse regarding Bailey Lois Quartermaine/Louise Jones (Harper and Scarlett Bloom) and that Louise is missing. How long can Maxie Jones (Kirsten Storms) keep lying?

General Hospital viewers will recall that Monica Quartermaine (Leslie Charleson) was worried about Maxie having developed an unhealthy obsession with “Bailey” in a recent episode of General Hospital. She firmly but gently steered Maxie to put the baby back in her bassinette, and suggested she focus on her other children to keep her mind off of her missing baby. Of course, as General Hospital viewers know, she’s really not missing – she’s Bailey!

In the General Hospital sneak peek, Maxie once again has shown up at the Quartermaine mansion for a visit with the baby, and this time Brook Lynn Quartermaine (Amanda Setton) doesn’t cooperate. Maxie, somewhat angry, demands to know why she cannot see her baby! Brook Lynn tells her that she is not trying to keep her from her baby, if that is what she is thinking. Brook Lynn continues, telling Maxie that she would never do that to her.

She reminds her, however, that they had made a deal that Maxie could be with the baby as much she wants on workdays at Deception, in the onsite nursery. Maxie protests, saying that Monica isn’t even there and neither is Valentin Cassadine (James Patrick Stuart)! Brook Lynn reminds her that even though Monica and Valentin aren’t home, her bodyguard and the rest of the staff are, and any of them could tell Monica or Valentin that Maxie was there with Bailey again.

General Hospital viewers know that if Maxie never comes clean and the truth about Peter August’s (Wes Ramsey) death isn’t revealed, this untenable situation could go on forever! Maxie protests, saying that she doesn’t understand why seeing the baby at the Quartermaine Mansion is such a big deal. Brook Lynn starts to tell her what Monica had told her in a recent episode of General Hospital, and Maxie interrupts her. Maxie is frustrated and tells Brook Lynn she knows that Monica is worried; Brook Lynn tells her Monica wants to discuss Maxie’s “obsession” with the baby with her parents, Mac and Felicia Scorpio (John J. York, Kristina Wagner).

This upsets Maxie – she walks off, saying no, no, no, the last thing that she needs is her parents getting all worked up over the situation! Brook Lynn approaches her, asking if she wants everyone hovering over her, determined to make her face reality, the reality being that her daughter is missing? Maxie interrupts again, saying that the baby isn’t missing. Maxie says she hates lying like this, as Brook Lynn sighs. She continues, telling Brook Lynn that Anna Devane (Finola Hughes) had promised her that she wouldn’t stop until Louise was found and brought back safe!

Maxie, nearly in tears, asks what is she supposed to say to that? Maxie is terrified that Anna is going to stumble onto the truth, and that Anna is a skilled investigator. Maxie tells Brook Lynn that she’s the only person she can be real with, and that they’re not even supposed to be friends! Brook Lynn poses an important question to Maxie; she asks her if she just wants to quit their charade, and tell everyone that Bailey is really Louise and take her daughter home?