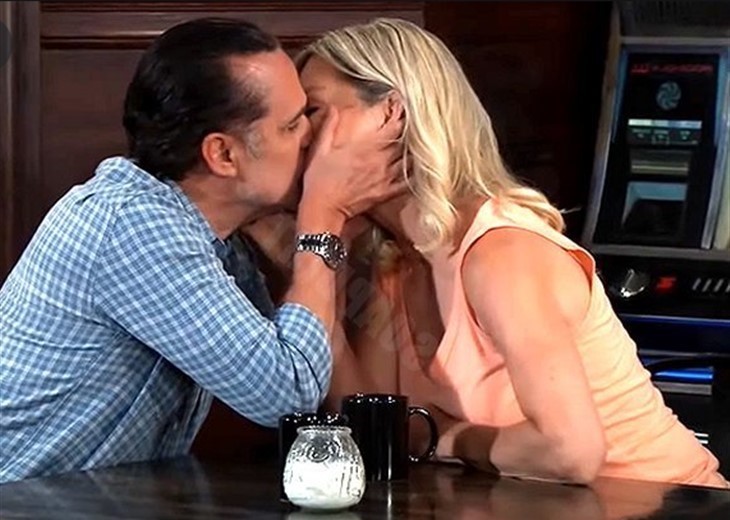 General Hospital (GH) spoilers tease that Nina Reeves (Cynthia Reeves) is still keeping a whopper of a secret. She knows that “Mike”, who has lost his memory, is really mob boss Sonny Corinthos (Maurice Bernard). Even worse, Nina has started to fall for “Mike” knowing full well who he is. And while “Mike” has been pursuing Nina romantically, that wouldn’t likely be the case if he knew who he was. But for now, “Mike” remains in the dark and he and Nina are dealing with the possibility of Lenny Caulfield’s (Rif Hutton) impending death.

Mike has been staying with Lenny and his wife, Phyllis Caulfield (Joyce Guy) in Nixon Falls where is earning his keep as a bartender/caretaker. And Phyllis was the nurse who cared for Nina when she was in here 20 year coma. Needless to say, Lenny and Phyllis mean quite a bit to Nina and “Mike”. The news that Lenny has pancreatic cancer has hit all of them pretty hard. And as his health gets worse, it will become much more real for everyone concerned. Phyllis has been pushing Nina and “Mike” toward romance for quite awhile now. Will they give into temptation as they grow more worried about Lenny?

Lenny’s poor health will greatly impact both Nina and “Mike”. It seems likely that in a moment of weakness, Nina may give and make love with “Mike”. But if that happens, Nina will likely have quite a bit of guilt. She knows that Mike is actually already married to Carly Corinthos (Laura Wright). Sonny won’t be happy to know thatNina basically kept him from family, especially once he finds out that Carly is planning to marry Jason Morgan (Steve Burton). No matter what, things are certainly going to be explosive.

General Hospital Spoilers – When Sonny Corinthos Gets His Memory Back, Things Are Going To Change!

In all fairness, Nina did try to contact Carly when she first found “Mike”. But Carly was terribly rude to Nina so she hung up. And “Mike” has indicated to Nina that he isn’t sure he wants to remember his past. But regardless of all that, Nina has effectively kept Sonny from his family. Once his memory returns, it’s anyone’s guess how he will feel about Nina. His feelings might just carry over, but it’s just as likely that they won’t, especially when he learns that Nina knew where he was for months.

As Lenny’s health begins to deteriorate, will Nina and “Mike” make love? And if that happens, will Nina’s guilt get the better of her. And how will Sonny feel once he learns the truth? Anything can happen in Port Charles so stay tuned to General Hospital airing weekdays on ABC. And don’t forget to check back right here regularly for all your General Hospital news, information and spoilers!

Y&R Spoilers: The Search For Mariah Heats Up – Chelsea Manipulates