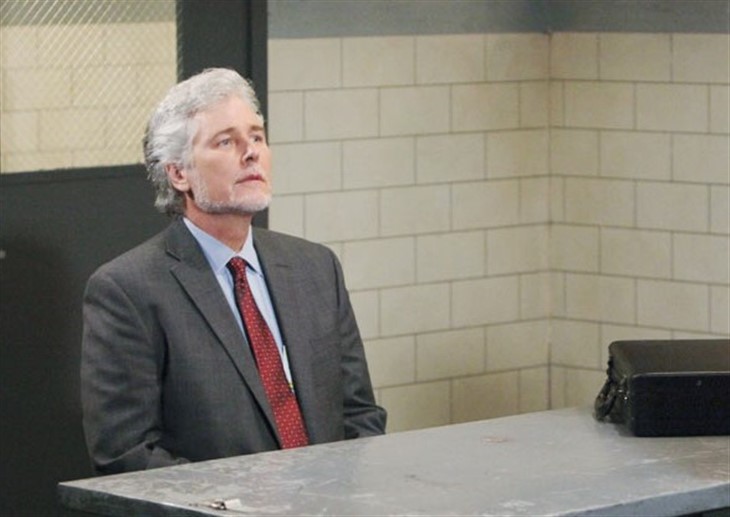 General Hospital Spoilers tease that Martin Gray’s (Michael E. Knight) return to Port Charles is just around the corner. Martin, along with his newly discovered half-sister Laura Collins (Genie Francis) had to enter witness protection when their shared brother, Cyrus Renault (Jeff Kober) put out a hit on both of them. But it should soon be safe for them to come home and Martin will need a project. He may just see Alexis Davis (Nancy Lee Grahn) as just that.

Alexis has had a tough year. A professed alcoholic, Alexis fell off the wagon and her condition became progressively worse until she finally hit rock bottom. While she was drunk, she feared that Franco Baldwin (Roger Howarth) was going to harm her daughter Sam McCall (Kelly Monaco) so she lunged at him with a syringe full of Lidocaine. Dante Falconeri (Dominic Zomprogna) stepped in between Alexis and Franco and Alexis stabbed him inadvertently in the chest.

Dante almost died from Alexis’ drunken attack. He did eventually pull through but Alexis faced criminal charges. She pled guilty and received a two year sentence. At first she was assigned to Pentonville, but after helped Shawn Butler (Sean Blakemore) expose a corrupted judge, she was transferred to Spring Ridge, which is a low security facility. But she is still incarcerated at the same location as known serial killer Ryan Chamberlain (Jon Lindstrom).

General Hospital Spoilers – Alexis Davis Has Been Keeping An Eye On Ryan Chamberlain!

Although it appears Ryan is suffering from locked-in syndrome, and therefore basically paralyzed, Alexis doesn’t trust that Ryan is as trapped as everyone believes. It is quite possible that Alexis will discover something very soon that will prove Ryan isn’t helpless. That’s where Martin may step in. If Alexis can prove that Ryan is still dangerous, she may have saved many lives. Martin may go to the courts to plead Alexis’ case. If all goes well, perhaps Alexis will be free by Christmas!

General Hospital Spoilers – Will Alexis discover that Ryan is still dangerous? Will Martin go to the courts on her behalf? Could Alexis get an early release? Anything can happen in Port Charles so stay tuned to General Hospital airing weekdays on ABC. And don’t forget to check back right here regularly for all your General Hospital news, information and spoilers!