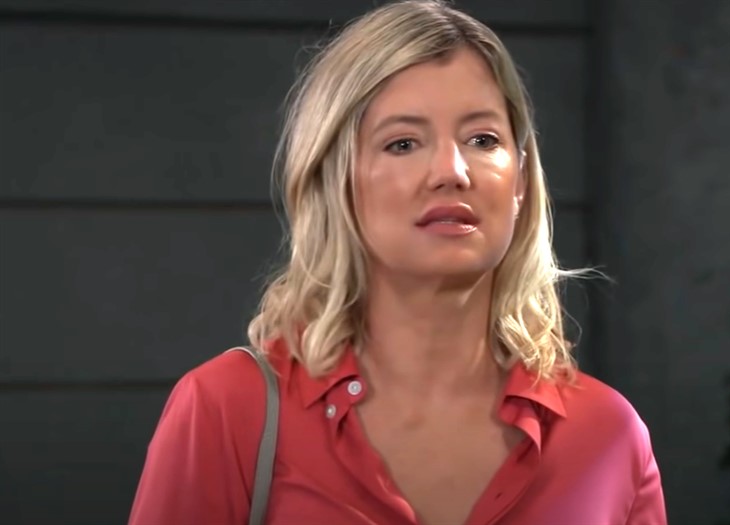 General Hospital (GH) spoilers and rumors tease that Nina Reeves (Cynthia Watros) will strike back when she notices Carly Corinthos (Laura Wright) is in love with Jason Morgan (Steve Burton)! Nina will call Carly out to Sonny Corinthos (Maurice Benard) for her secret love in future episodes of General Hospital!

Longtime General Hospital viewers will recall that Carly fell for Jason years before Sonny came on the scene! Carly had a one night stand with AJ Quartermaine (Sean Kanan) that produced Michael Corinthos (Chad Duell) but it was Jason who took over parenting duties when Carly suffered post-partum depression and couldn’t care for her child. Carly was also afraid to care for baby Michael because of the heart condition that he inherited. She was literally afraid to touch him.

Carly had already been involved as lovers with Jason even during the short time she was married to his brother, AJ, who she grew to hate. By the time Michael was born, however, Sonny had hit Port Charles and hired Jason as his enforcer. Jason named Michael “Michael Morgan Corinthos” after Sonny, whose given name is “Michael” and his grandmother Lila Morgan Quartermaine (Anna Lee) whose maiden surname he also chose in favor over the Quartermaine surname. General Hospital viewers will recall that shortly before Carly and Jason married, she relived their romance in flashbacks, and Jason admitted he’d pushed his feelings down for her as well all these years.

General Hospital viewers know that Nina knows that Carly and Jason have been close friends for years, and even though their marriage was supposed to be a business arrangement, she notices there is something between them when she observes them together. Nina may have been surprised when she saw Jason rush in and save her from an enraged Carly who tracked her down at the Quartermaine house, but she quickly deduced that he was saving Carly from herself, not saving her from Carly!

General Hospital viewers know that Carly and Jason have a secret love between them that they are trying to squelch, but it’s not that easy considering their torches for each other have reignited after many years! Sonny nearly walked in on their consummating their marriage when he showed up unexpectedly from “the dead”! General Hospital viewers will recall that Carly was so shocked she fainted!

General Hospital viewers will recall that Nina’s first worry is that Carly would keep her from ever seeing her grandson again! However, that would not be in Wiley Corinthos’ (Kyler and Caleb Ends) best interest, since he is now old enough to have bonded with Grandma Nina and it would upset him for her to be ripped from his life by Grandma Carly!

Even Michael and Willow Tait (Katelyn MacMullen) may agree with that point, although Michael too would be upset to find out that Nina has known his adoptive father Sonny had been alive for many months and not told anyone! That news will probably be told to him soon in a General Hospital episode. But Carly being Carly, she’ll push the envelope and be bent on ruining whatever life Nina may have left in Port Charles, so Nina will find a way to strike back! Down-the-road General Hospital spoilers tease that Sonny will confront Jason about something after Carly makes an unexpected choice, and that may be because Nina has told Sonny about Jason and Carly having torches for each other!