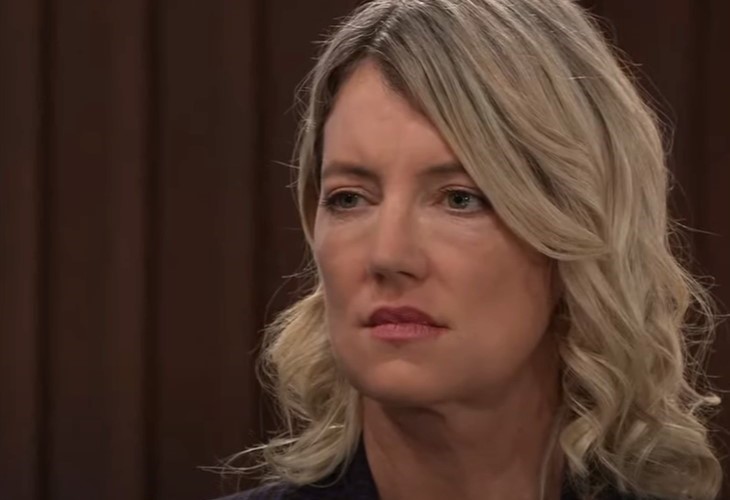 General Hospital spoilers for Thursday, December 23, 2021, reveal Nina’s preliminary trial beginning and Scott using every weapon he has to get the case thrown out of court.

Not telling a man who he is when he has amnesia is not identity theft by any stretch of the imagination, but Michael Corinthos (Chad Duell) and a politician in Pennsylvania are pretending it is, so we have to go with it. Thanks to Liesl Obrect (Kathleen Gati), Scott Baldwin (Kin Shriner) knows that there is more to this story than meets the eye and he is determined to make it come out in court one way or another.

First, he has to question the alleged victim of this non-crime, so Sonny Corinthos (Maurice Benard) takes the stand and Scott asks him why he never pressed charges against Nina Reeves (Cynthia Watros) when he learned she knew he was the whole time and Sonny will be forced to answer.

If Sonny doesn’t give Scott the answer he wants, then will Scott put Willow Tait (Katelyn MacMullen) on the stand and force her to admit what she knows about Sonny and Nina’s relationship?

Now that both Victor Cassadine (Charles Shaughnessy) and Liesl are in Port Charles and free, they meet up outside of Kelly’s for a tense confrontation. Liesl warns her old lover that she will not let him get away with what he did to her in Crete, while Victor warns Liesl not to stand in his way of whatever it is he plans to do in PC.

Clearly, his sights are set on Laura Collins (Genie Francis) and she is beginning to realize that. Nikolas Cassadine (Marcus Coloma) and Laura catch up over breakfast at the Metro Court and Laura questions her son about Victor’s presence in town — and the fact that he is alive.

General Hospital Spoilers – Esme Price Is Only Around For Trouble

Trina Robinson and Spencer Cassadine (Nicholas Chavez) have an encounter and it looks to be an emotional one as Spencer tells Trina he wishes he could see himself the way she does.

Over at Elizabeth’s (Rebecca Herbst) house, Josslyn Jacks (Eden McCoy) and Cameron Webber (Will Lipton) argue about Esme Prince (Avery Pohl). Cam doesn’t think she is so bad and Joss hates the young woman. When Esme shows up at the door looking for help, Joss isn’t buying her act at all. Stay tuned to General Hospital weekdays to see how these stories play out.