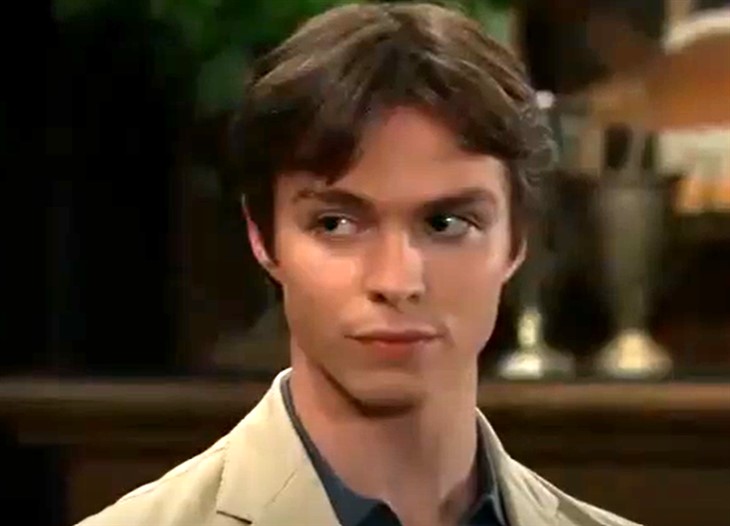 General Hospital viewers will recall from a recent episode of General Hospital that Kevin Collins (Jon Lindstrom) had been able to contact Laura Collins (Genie Francis) to notify her about her grandson’s problems. Laura had agreed with him that they would provide Spencer’s bail. General Hospital viewers will recall that Spencer was arrested after Ava Cassadine (Maura West) pressed charges for the malicious mischief, harassment and destruction of property Spencer caused while trying to break her and Nikolas Cassadine (Marcus Coloma) up.

Just the fake blood in the sprinkler system alone caused untold thousands and possibly millions of dollars in ruined art objects at the Jerome gallery! But, Spencer’s bailout came with conditions – Spencer had to find a job – and keep it! Spencer is not even sure where to look or how to start, having been raised as a privileged rich kid with a trust fund that seems to be limitless – and now managed by Ava, to Spencer’s frustration! Spencer pled not guilty just to spite Ava when she showed up at his arraignment!

General Hospital viewers will recall that Spencer received little help from his girlfriend Esme Prince (Avery Kristen Pohl), Esme citing that her trust fund manager wouldn’t allow her funds to pay Spencer’s bail. Yet, she immediately whined to him about what would happen to her if Spencer went to jail, and worried over his inability to support her! General Hospital viewers know that The Metro Court or The Savoy are more Esme’s style, but yet they are forced to brainstorm job options for Spencer at the much more humble Kelly’s. Esme, not having a clue about the working world more than likely, tells Spencer a popular saying. She tells him in getting a job, it’s not what you know but who you know! In spite of that, General Hospital viewers will recall she just landed an internship at Spring Ridge.

Spencer amends Esme’s advice, saying it’s who you know who still likes you! It so happens, as they are discussing possible job options for Spencer, that Cameron is bussing tables nearby and overhears. General Hospital viewers will recall that Cameron gave up a full scholarship to a prestigious college on the West Coast in order to help his family after the murder of his stepfather Franco Baldwin (Roger Howarth) and his mother, Nurse Elizabeth Baldwin’s (Rebecca Herbst) hours were cut by Cyrus Renault (Jeff Kober) during his reign of terror at General Hospital.

Also, Cameron has been in a little legal trouble as well although Spencer probably knows nothing about it – not as serious as Spencer is in, however. Cameron probably reaches out to Spencer with the job lead out of sympathy, not to stick it to him although he’d have every right to do so! Not only Cameron, but the comparatively well-to-do Josslyn Jacks (Eden McCoy) also spent a lot of their younger lives being looked down upon and sneered at by the young Cassadine prince Spencer, who called them “townies”!

Apparently Cameron has got a bit of a promotion at Kelly’s and knows of a position that is opening up – and which he is to be the supervisor of the new hire! He offers Spencer to work under him at Kelly’s as a waiter. Spencer decides to take it, but he’s not as humbled as he appears to be.

In the back of Spencer’s mind is embarrassment to his father, hoping that Spencer’s taking a job that is so beneath him will be an insult! General Hospital viewers can expect that Nikolas may not be all so embarrassed as Spencer thinks he will, because Ava, who is the child of a working class single mother has not forgotten her roots, and is giving Nikolas some lessons as well! General Hospital viewers can also expect that Laura Collins, who is also Cameron’s grandmother by marriage, will wholeheartedly approve of Spencer’s job and Nikolas’ schooling by Ava as well!