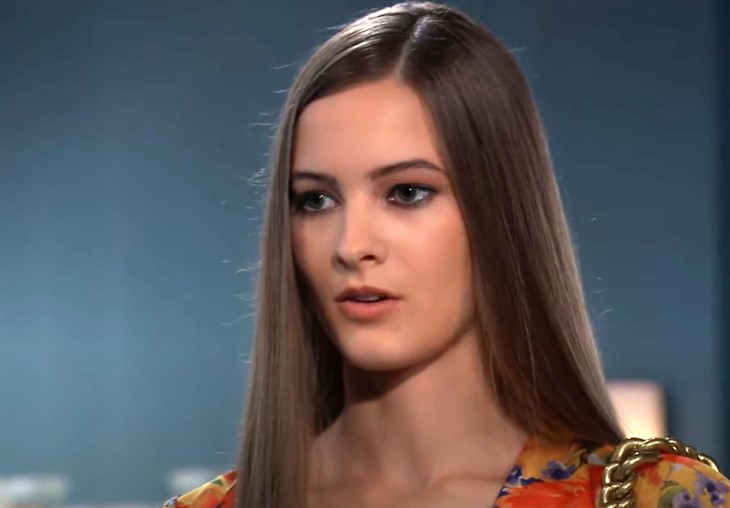 General Hospital (GH) spoilers tease that Josslyn Jacks (Eden McCoy) may soon regret pushing Esme Prince (Kristen Avery Pohl) as far as she has. While Spencer Cassadine (Nicholas Chavez) has confessed to stalking Ava Jerome (Maura West), he seems intent on protecting Esme as much as he can. But Esme has a long memory, and she won’t soon forget how Josslyn came after her. And the best way to get back at Joss it to go after her boyfriend!

With Spencer possibly going to jail for his part in the stalking, Esme will likely be quite proud of herself. Spoilers indicate that Esme will soon take a night to celebrate at the Savor. Will she tell Cameron Webber (William Lipton) some sob story to get him to fall for her act? Will he soon believe that Esme has gotten a raw deal from his girlfriend and Trina Robinson (Sydney Mikayla)? Will Esme try to take it a step further and flirt with him?

While Cameron will certainly not flirt back with Esme, he will likely come out feeling sorry for her. He may even tell Joss and Trina to back off when it comes to Trina. This will certainly please Esme, who will see Cameron as nothing more than a way to get back at Joss. Joss will certainly be aware of Esme’s goal and she won’t stand for it, although she and Cameron may not see eye to eye. They may even argue a bit, but in the end Cameron and Joss have waited too long to be together to let anyone come between them now.

Josslyn is very much Carly Corinthos’ (Laura Wright). Esme will be in for a world of hurt should Joss believe that Esme is going after what is hers. Whether or not Cameron will agree remains to be seen but either way, don’t look for Joss to take it easy on Esme anytime soon. She will rightly believe that Esme manipulated Spencer to go through with stalking Ava. And then there is the fact that Esme is the one who set Ava’s car on fire. Don’t look for Josslyn to stop until Esme is exposed.

Will Spencer lie to protect Esme while he faces the consequences? Why did Esme go along with the stalking plan in the first place? Or is she the one who started it? Only time will tell, so stay tuned to General Hospital airing weekdays on ABC. And don’t forget to check back right here regularly for all your General Hospital news, information and spoilers!