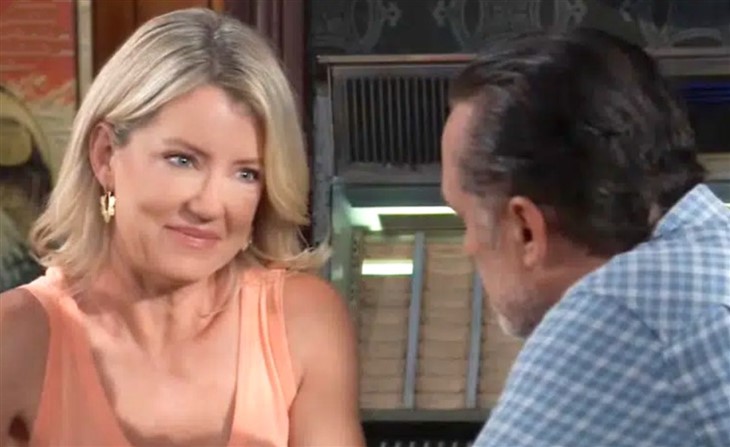 General Hospital spoilers reveal that Willow Tait (Katelyn MacMullen) will likely keep Nina Reeves’ (Cynthia Watros) secret. It’s not for Nina, but the Corinthos family is going through too much right now. However, someone may see Sonny Corinthos (Maurice Benard) comforting Nina. Willow could face backlash and consequences for keeping Nina’s secret.

GH spoilers reveal that Willow overheard Sonny and Nina talking about their romance in Nixon Falls. Even though the two thought that they were alone, Nina soon discovered that Willow overheard. After finding out exactly what Willow knew, she made a plea for her silence. Willow didn’t give Nina an answer. Despite Willow knowing how easily secrets can destroy lives, she might have a reason to keep quiet… for now.

The Corinthos family is going through a lot right now. Brando Corbin (Johnny Wactor) and Sasha Gilmore (Sofia Mattsson) are dealing with a traumatic delivery and the baby being in the NICU. Baby Liam “Mike” Corbin was deprived of oxygen and needs to undergo testing to see if there is any brain damage.

During the week of December 13, it is teased that Sonny will provide comfort. Sonny could be consoling Carly, Brando or someone else close to him. However, it is speculated that it might actually be Nina.

General Hospital spoilers reveal that Sonny’s comfort will air on Tuesday, December 14. The very next day, on Wednesday, December 15, Michael Corinthos (Chad Duell) sees something shocking. So, it makes sense that what Michael sees is who Sonny comforts. The only person he would really be shocked at Sonny consoling is Nina.

Michael will immediately rush to vent to Willow about what he saw. Willow has never been a good liar, so Michael will be able to tell that she already knows about Sonny and Nina. Michael will be stunned and probably demand answers as to why Willow didn’t tell him. Willow can give all the reasons, but that might not be good enough for Michael. Not only could it put Willow’s relationship at risk, but Carly’s head will explode.

Willow just might end up going from being “family” to “the enemy.” What does this mean for Nina, Carly, Sonny, Willow, Michael and Wiley Quartermaine-Corinthos (Kyler and Caleb Ends)?