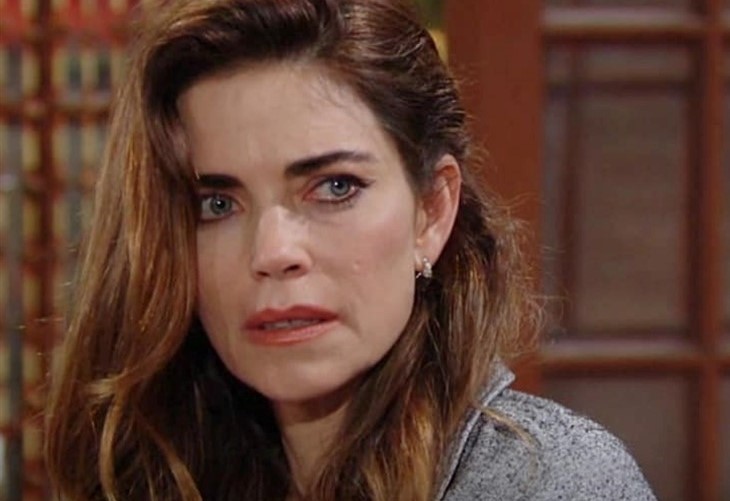 The Young and the Restless spoilers reveal that Ashland Locke (Richard Burgi) is the secret-keeper. However, it might be time for Victoria Newman-Locke (Amelia Heinle) to have a secret. Victoria will get even more worried about Billy Abbott (Jason Thompson). Not wanting to risk being called out for protecting Billy again, could she call in a favor to someone unexpected?

The Young And The Restless Spoilers – Wedding Dress And Embrace

Y&R spoilers reveal that Sally Spectra (Courtney Hope) managed to get Victoria to wear the wedding dress that she designed. Even though Victoria didn’t approve of her methods, she did thank and embrace Sally. The two didn’t exactly become friends, but Victoria likes to keep potential allies in her pocket.

Victoria might have been grateful for the wedding dress, but Sally was put on the map because of it. So, Sally really owes Victoria for her revitalized career. This could come into play in the near future.

Billy has seemingly lost everything, but he’s not giving up. Billy has been acting like a drunkard when he’s really sipping club soda. There is a reason for this and it’s because he wants to blindside his enemies. Billy was hoping that Jack Abbott (Peter Bergman) would join him in making an offer to ChancComm. However, Jack refused and walked away from the conversation.

The Young And The Restless Spoilers – Victoria Newman-Locke’s Concern

The Young and the Restless spoilers reveal that news of Billy drinking in the morning has already reached Adam Newman (Mark Grossman). It will eventually get back to Victoria, who is already worried about her ex. Despite Victoria claiming not to care about Billy personally and is only focused on business, that’s not true. Victoria had to practically be dragged away from Society by Ashland.

When Victoria learned that Billy was being iced out of Lily Winters (Christel Khalil) and Jill Abbott’s (Jess Walton) business meeting, she felt bad. Victoria kept looking back at Billy as Ashland pulled her out the door. The look on Victoria’s face was concern. Billy might be her ex and has pulled a lot of stunts, but that is still the father of her children.

Victoria has already been warned by Victor Newman (Eric Braeden) not to jump in and save Billy again. Victoria insisted that her interest in ChancComm was purely business. So, Victoria might want to save Billy, but doesn’t want to get into another war with her father about it.

More importantly, Victoria doesn’t want to risk her marriage or Ashland’s wrath. So, she can’t be caught saving Billy. What Victoria can do, though, is call in a favor to someone who can play both sides. That person is probably Sally. Now, Sally might express concern about crossing Adam, but that’s when Victoria could offer her a sweet deal. Is it possible that if Sally successfully completes her assignment, then she will get her very own fashion house with Newman-Locke? Sally did admit to Jack a while back that having her own fashion house again is her ultimate goal. Maybe this will be Sally’s chance, even if it does conflict with her heart’s desire to be with Adam.