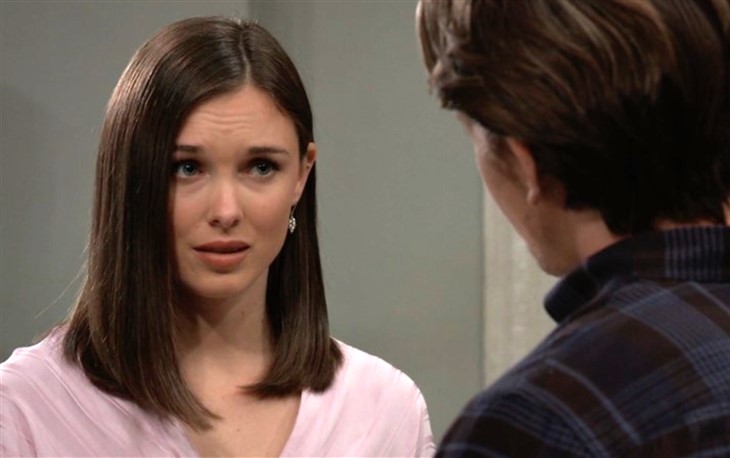 General Hospital spoilers for the week of December 6 reveal that Harrison Chase (Josh Swickard) has stepped up as Bailey Quartermaine’s (Scarlett and Harper Bloom) new fake baby daddy. Chase is already facing the consequences of making that sacrifice. It is teased that Chase could continue to suffer, especially when he gets an earful from Michael Corinthos (Chad Duell) and Willow Tait (Katelyn MacMullen).

GH spoilers reveal that after Peter August (Wes Ramsey) poisoned Chase, he was on his deathbed for a long time. Willow couldn’t break the news that she didn’t want to be with him, but Michael. Willow and Michael kept their relationship a secret and the original plan was to tell Chase the truth once he was better. However, he ended up getting worse and so the lie continued – even with WIllow marrying Chase only for him to make a miraculous recovery.

As fans recall, when Chase found out the truth, he ripped into Michael and Willow. Eventually, there was forgiveness and understanding. However, the new bombshell about Bailey’s baby daddy could change all of that.

General Hospital spoilers reveal that Chase knows how dangerous Peter is, even behind bars. Until Peter is dead, no one is really going to be safe. Maxie Jones (Kirsten Storms) and Brook Lynn Quartermaine (Amanda Setton) are going to continue the Bailey scheme until Peter is serving a long prison sentence. With Gladys Corbin (Bonnie Burroughs) letting Valentin Cassadine (James Patrick Stuart) know that he’s not Bailey’s father, Chase came to save Brook Lynn.

In any other case, Chase would insist that honesty is the best policy. However, an innocent child is in danger, but it will come at the risk of Chase losing everything. Chase is already suspended from duty after his fight with Valentin. The baby daddy lie will have Chase facing other consequences as well. It seems that everyone is hating Chase right now despite Brook Lynn saying that he didn’t know. Ned seems to think that Chase should have known because of the timing. This has forced Brook Lynn and Chase’s lies to get more complicated, which raises the stakes for everyone.

It is teased that during the week of December 6, Michael and Willow will have a heated discussion with Chase and Brook Lynn. All that rage that Chase belted out due to Michael and Willow’s secret romance will be brought up. Chase won’t be able to tell them the truth, so he will just have to take the heat. It looks like Chase will continue to lose friends, respect and possibly his career. Could he regret making the decision to be Bailey’s new baby daddy? How much more will he lose?