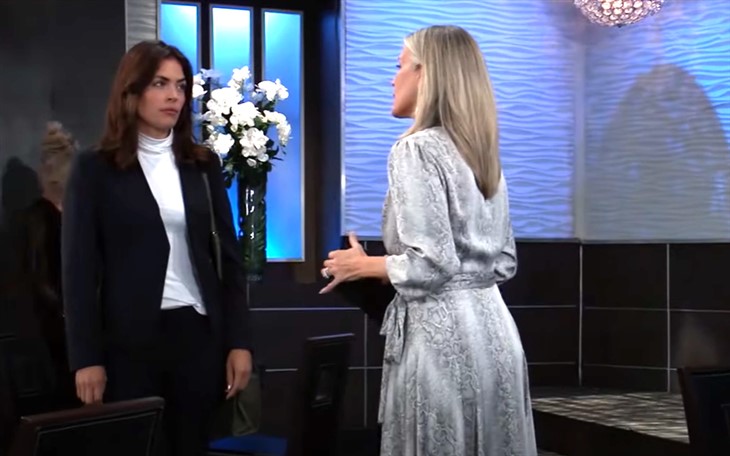 General Hospital (GH) spoilers tease that it is beginning to look like Jason Morgan (Steve Burton) isn’t returning from Greece. As viewers know, Jason accompanied Dr. Britt Westbourne to help rescue her mother, Dr. Leisl O’Brecht (Kathleen Gati) after she had been kidnapped by Victor Cassadine (Charles Shaughnessy) and Peter August (Wes Ramsey). They have located Leisl as well as Jason’s twin brother, Drew Cain (Cameron Mathison). Right now, things seem dire for everyone involved but everyone will likely eventually return to Port Charles. That is, except Jason. And that will likely set off fireworks between Britt and the Corinthos clan!

When Jason told Sonny Corinthos (Maurice Bernard) and Carly Corinthos (Laura Wright) where he was going, he left with their full blessing. It was probably for the best since Jason and Carly had gotten married while Sonny had been presumed dead. But even Sonny has no idea that Carly had fallen in love with Jason in his absence, he just thought the marriage was a business arrangement. Some time away from each other would be good for all parties involved.

But if Jason does indeed die, or at least go missing in Greece, Carly’s feelings won’t likely remain under wraps. She will be inconsolable and will lash out. Even Sonny may receive some of her ire. But her main target will like be Britt. After all, Jason never would have gone to Greece if not for Britt. But Britt has her own unresolved feeling for Jason, so look for her to give as good as she gets. The two will likely remain at odds for quite some time.

Usually grief will bring people together. And that may eventually be the case for Britt and Carly. But before that can happen, look for accusations and finger pointing from both sides. Look for Drew’s presence to make matters worse, especially if he and Britt become romantically involved eventually? Carly will be furious that Drew is back, but not Jason.

Will Jason die or vanish in Greece? Will Carly blame Britt for Jason’s fate? Will Sonny realize just how deep Carly’s feelings for Jason run? Anything can happen in Port Charles so stay tuned to General Hospital airing weekdays on ABC. And don’t forget to check back right here regularly for all your General Hospital news, information and spoilers!