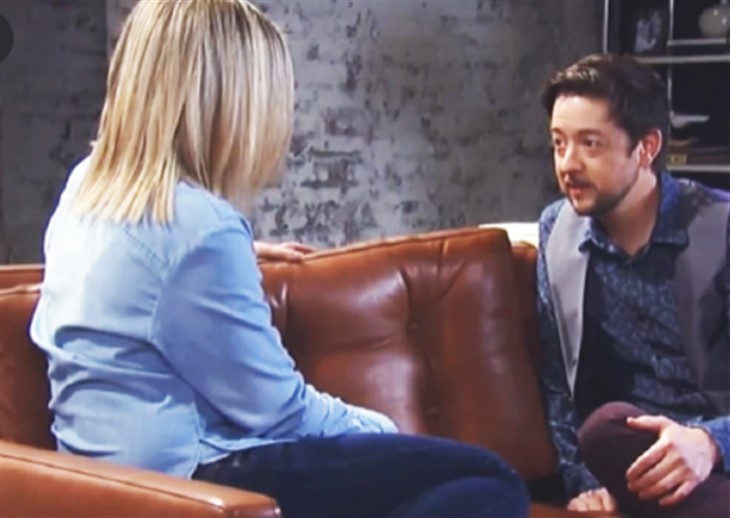 General Hospital (GH) spoilers reveal that a long-awaited fan wish for Damian Spinelli (Bradford Anderson) and Maxie Jones (Kirsten Storms) to get back together could be about to come true.

Spin has been back in town for some time now, with no story of his own other than using his computer wizardry to help out his friends. We know that Ellie Trout (Emily Wilson) has left him which means that he’s single and ready to mingle. Has he ever really gotten over Maximista?

Maxie believes that she and her baby Louise August (Harper and Scarlett Bloom) are in danger from baby daddy Peter August (Wes Ramsey). As it turns out she’s right since Peter is alive and not dead after all. This means that her baby will stay with Brook Lynn Quartermaine (Amanda Setton) for a while longer.

Meanwhile Austin Gatlin Holt (Roger Howarth) has been identified by BLQ as being totally into Maxie. Is Maxie interested? Not right now since she is afraid to be around him due to him potentially learning the secret she is keeping about the baby he delivered.

If they spend time together, could he discover that BLQ’s baby Baily is actually Louise? Probably not by sight alone since babies change so much. But he could hear something that clues him in. So for now, Maxie pairing with Austin seems out of the picture.

Spin has been evolving lately, from a computer nerd to a beefy man of action. That was Spin who punched a Novack mob weasel into submission so if Maxie needs protection from Peter or anyone else, we know Spin is up to the task.

Plus Spinelli is great dad material as he has shown with Georgie Spinelli (Lily Fisher). There is no doubt he would accept James West (Curtis and Owen Rufca) as his own as well as Baby Louise once that whole dangling plot resolves.

Will something magical happen for Spixie at Jason Morgan’s (Steve Burton) and Carly Corinthos’ (Laura Wright) wedding? Something spectacular is always guaranteed to happen at a soap wedding, so anything is possible!