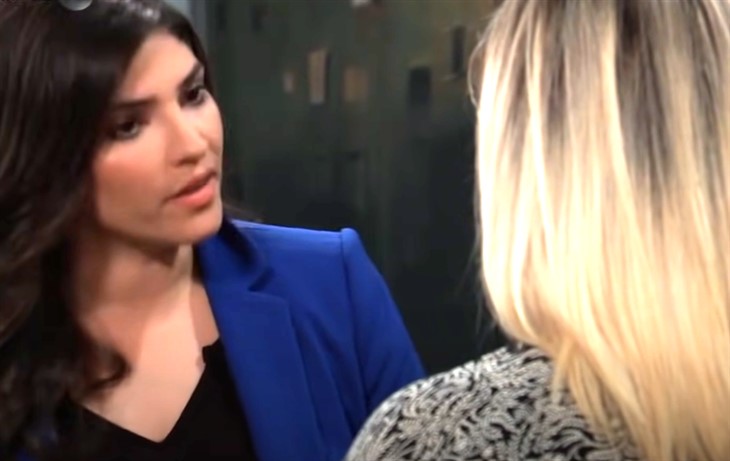 General Hospital viewers know that even though Maxie is not supposed to show as much attachment to “Bailey Lois Quartermaine” aka Louise August (Harper and Scarlett Bloom) she cannot help but mother her. That is the reason for her recent trip to Texas to visit relatives, because Monica Quartermaine (Leslie Charleson) in particular had noticed that Maxie was way too attached to a baby who supposedly isn’t hers!

General Hospital viewers know that as far as anyone except Brook Lynn and Maxie know, the baby living in the Quartermaine mansion is Bailey, and her parents are Brook Lynn and Valentin Cassadine (James Patrick Stuart)! But there is more to the situation than just one baby disguised as another, who actually never existed; there are bound to be differences in child care methods and other things besides bottle feedings and diaper changes, and pretty soon Brook Lynn and Maxie are going to clash!

General Hospital viewers will see Maxie noticing Brook Lynn doing something that she doesn’t agree with. They will get into an argument over what’s best for the baby, and it will more than likely be either in the Quartermaine mansion or perhaps close to the offices of Deception. General Hospital viewers will recall that Valentin could be in either place, as the CEO of ELQ and the co-CEO of Deception! Either way, they will endanger their secret by not realizing they could be heard by the wrong person as their confrontation becomes louder!

They will soon come to a crossroads where their differences in what is best for Bailey/Louise may split up their “partnership”. If Maxie loses control of her emotions in her argument she could very well blurt out something along the lines of her being her mother and knows what’s best for her! That would certainly blow their secret to smithereens and with Peter August (Wes Ramsey) still being alive and a danger, that could be catastrophic!

General Hospital Spoilers – Too Many Ears To Hear

General Hospital viewers will not be surprised if what the two of them have feared comes to pass – they lose control, they get too loud – and the wrong person hears! General Hospital viewers will see Maxie wanting her baby back from Brook Lynn and she’s not going to care whether Brook Lynn or ELQ lose any shares! There is so much tension and conflict twenty-four seven in the Quartermaine house, Maxie may fear that her little Louise will be unduly influenced, and become a dysfunctional, selfish and hateful person like many of the Quartermaines seem to be – well, at least Brook Lynn and her grandmother Tracy Quartermaine (Jane Elliot)!

In the Quartermaine house, with the possible exception of Michael Corinthos (Chad Duell) money seems to be the top priority and even Olivia Quartermaine (Lisa LoCicero) has fallen into the pattern at times! Brook Lynn has never planned beyond the step of getting a baby to con Valentin with and how to handle it when the baby has to go back to her rightful parent! It looks like that time is going to come soon!