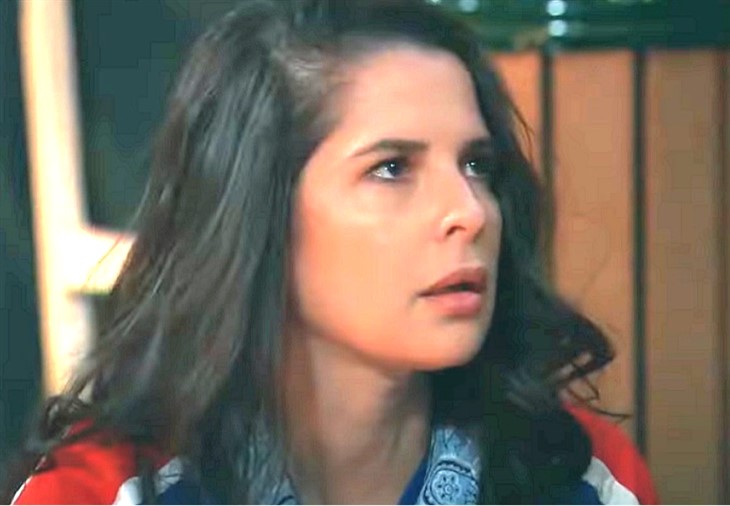 General Hospital spoilers and rumors tease that even though Dante Falconeri (Dominic Zamprogna) will be helping Sam McCall (Kelly Monaco) find her ex-husband Drew Cain (Cameron Mathison) she’ll be torn between the two men when Drew returns in an upcoming episode of General Hospital!

As General Hospital viewers see Sam and Dante getting closer and closer to becoming a real couple, they will recall that Sam was torn between Drew and Jason Morgan (Steve Burton) when he first returned! General Hospital viewers will remember that Jason had been missing for five years and presumed dead when he returned to Port Charles. A couple of years earlier, Dr. Robin Scorpio-Drake (Kimberly McCullough) had discovered who she had thought at the time to be Jason, frozen in stasis in Helena Cassadine’s (Constance Towers) medical compound.

Robin herself had been thought to be dead when she was kidnapped in order to develop a life giving serum to raise Stavros Cassadine (Robert Kelker-Kelly) from the dead. Instead, she used it on who she thought was Jason! In reality, as General Hospital viewers and Sam found out later, it was Jason’s twin, Drew. Everyone thought he was Jason after he started remembering some of Jason’s life. Sam divorced Drew and remarried Jason when he returned, but she was torn between the two of them.

General Hospital viewers will recall the reason Sam had a difficult time deciding to divorce Drew and marry Jason is because Drew offered a safer and more secure life. Even when Drew thought he was Jason he refused to work for Sonny Corinthos (Maurice Benard) as his enforcer. General Hospital viewers will remember that he went into the business world, where he and Sam started Aurora Communications and worked together for a short while, in the meantime having their daughter, Emily “Scout” Cain (Ella Ramacieri).

In fact, Drew’s main motivation to try so hard to escape his captors is to get back to Scout, but Sam is right there in his visions as well. But after Drew disappeared, and was presumed dead, and Cyrus Renault (Jeff Kober) started up the mob wars again in Port Charles, Sam divorced Jason, citing those same dangers and insecurity because she knew Sonny and the mob always came first. It was different as a mom with children than it was when she was a young woman without parental responsibilities!

General Hospital Spoilers And Rumors – Dante Falconeri May Be A Single Father, But He’s Also A Cop

General Hospital viewers know that while Dante is also a single parent, as Sam is, he is also a cop. A cop’s life can be very dangerous as well, although he’s on the other side of the law from Jason. When Drew does come back, whether he is rescued or brought back, those same contrasts may hit home with Sam – with a life with Drew perhaps being a safer choice than a life with Dante! The question of Dante and Sam becoming serious may not even have come up between the two of them yet, but Sam knows that it could happen and she obviously still cares for Drew or she would not be on a mission to find and rescue him!

Drew will likely go back and run Aurora with Michael Corinthos (Chad Duell) which will be much safer an environment than the challenges faced by Dante as a detective for the Port Charles Police Department. Even if Sam has some romantic feelings for Dante, if she finds she still has feelings for Drew as well and he reciprocates them, as he well may, she’ll be torn between them when Drew’s back in the picture because of the need for security and safety!