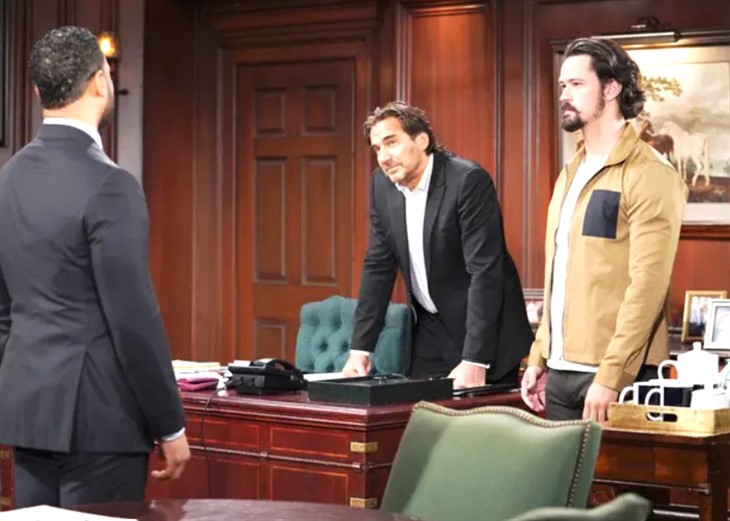 The Bold And The Beautiful’s Ridge cannot understand why his father has taken Quinn back after her affair with Carter Walton (Lawrence Saint-Victor). Ridge knows that Eric Forrester (John McCook) loves Quinn but he does not understand how he can let her back into his life. It doesn’t matter that Ridge has made the same choices as Eric, he just doesn’t understand his father’s need to have Quinn around. Is Eric just afraid to be alone? Could he believe that no other woman wants to be with him? Why would Eric take someone back who continues to betray him? Eric believes his father is being taken advantage of and he is determined to prevent that.

The Bold And The Beautiful’s Ridge has a history with Quinn as well. Ridge believes that anyone who trusts Quinn has a serious problem. Quinn has given Ridge plenty of reason not to trust her. Quinn also orchestrated Ridge and Shauna Fulton’s (Denise Richard) marriage in Las Vegas. Ridge pretended to support Quinn while attempting to get her out of his father’s life. However, Ridge begins to see a different side of her and begins to defend her. Brooke even caught Ridge and Quinn kissing at one time and threatened to go to Eric. Ridge simply wants what is best for his dad and he doesn’t believe that Quinn is it.

The Bold And The Beautiful Spoilers – A Man On A Mission

The Bold And The Beautiful’s Ridge is a man on a mission. Ridge hires Justin to follow Quinn and get whatever dirt he can collect on her. Ridge knows that Justin is more than capable of doing this job. Justin took pictures of Ridge talking to a judge for Bill years ago. Justin is dirty and ruthless and that could work to Ridge’s advantage. However, Ridge may be stunned at what he finds. Will Justin find out about Eric’s ED problems? Could Justin come back and tell Ridge that Eric has sanctioned this affair with Carter?

Ridge would be perfectly happy for Justin to find nothing. However, Ridge knows this isn’t likely to be the case. Unfortunately, Ridge will probably be stunned by what he does discover and not know what to do with that information.