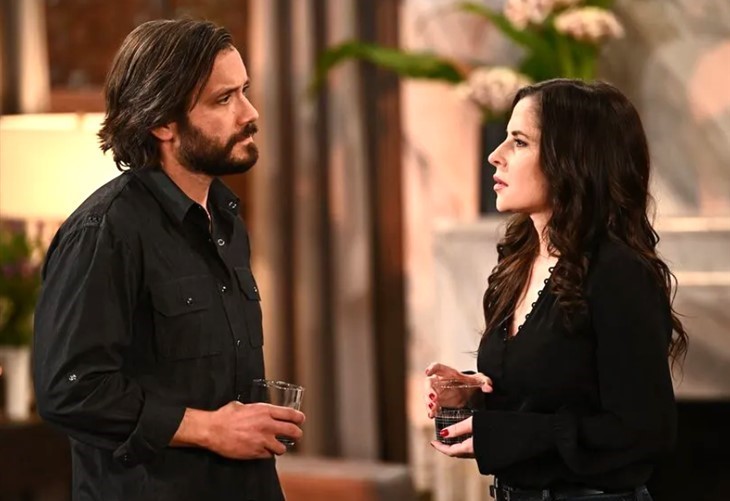 General Hospital Spoilers tease that Sam McCall (Kelly Monaco) and Dante Falconeri (Dominic Zomprogna) have been inching closer and closer the past few months. While these two might seem to be polar opposites, it seems to be working in their favor. They even kissed on the 4th of July. But the couple are likely to take the next step in their relationship very soon. But does this couple have what it takes to make it in the long term? Let’s take a look.

Sam isn’t the love of Dante’s life. That honor goes to Lulu Spencer (last played by Emme Rylan). Lulu and Dante were together for years, and were happily married. But Dante took an undercover assignment that took him away from Lulu for many months. And even when he returned, Dante wasn’t himself. He had been brainwashed and couldn’t be sure that he wouldn’t inadvertently harm his family. Dante left Lulu to get treatment and soon sent her divorce papers. Dante eventually returned and he and Lulu were about to reunite when an explosion tore the Floating Rib apart, which put Lulu in a coma. Lulu is out of Port Charles and still hasn’t regained consciousness. Dante is reluctantly ready to move on since Lulu may never recover.

For her part, Sam was involved with Jason Morgan (Steve Burton) for many years. But Jason involvement with the mob eventually caused Sam to break up with Jason, citing the danger to their kids. But Sam still loved Jason, and wasn’t ready to move on. But hearing that Jason is about to marry Carly Corinthos (Laura Wright) may be exactly what Sam needs to move on.

It may be strange for Dante and Sam to even consider a romance. Sam once dated Dante’s father, Sonny Corinthos (Maurice Bernard) and although she miscarried, she was pregnant with Sonny’s baby at one point. Sam and Dante probably never even considered the possibility of romance, and they may not be together forever but for right now, they seem to be exactly what each other needs.

Are Sam and Dante about to take their romance to the next level? Do they have what it takes to be a couple long-term? Or are there too many reasons why they could never work? Only time will tell, so stay tuned to General Hospital airing weekdays on ABC. And don’t forget to check back right here regularly for all your General Hospital news, information and spoilers!