GH Spoilers: Sam Tells Maxie About Her Relationship With Dante, Will She Approve? 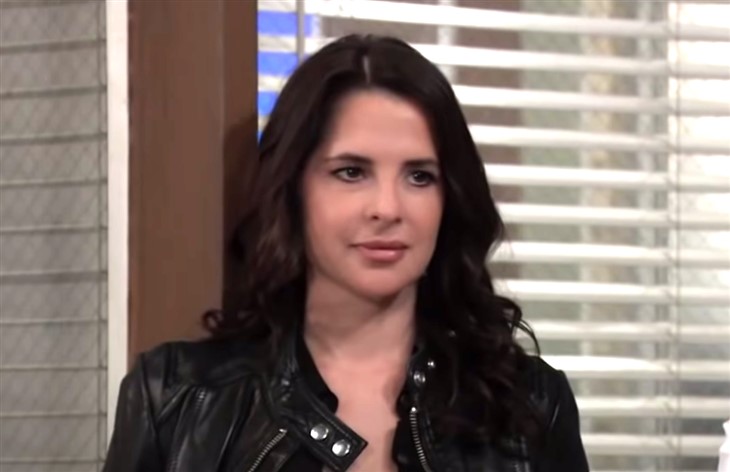 General Hospital (GH) spoilers and updates tease Sam McCall (Kelly Monaco) has been busy. She has been trying to find Drew Cain (Cameron Mathison) to bring him home to be with his daughter Scout Cain (Ella Ramacieri). Sam has been trying to help Shawn Butler (Sean Blakemore) to clear his name from shooting Hayden Barnes (Rebecca Budig). Sam has started to date Dante Falconari (Dominic Zamprogna). Dante has been helping Sam in her different investigations. Sam will want to take the time to reconnect with two people that are important to her.

Sam has been worried about her mother Alexis Davis (Nancy Lee Grahn). Alexis has had legal problems and was sent to jail for accidently attacking Dante. Dante did not want Alexis to go to jail because he has come to care about Sam. Sam is going to be happy to find out that Alexis has been given a pardon. Sam knows that Alexis had trouble with drinking before she was sent to jail. Alexis has been able to find a way to overcome her drinking problem and is ready to find a way to get her life back. Sam will want to help Alexis to get settled back into her life. Sam will want to make sure that Alexis will be able to face her life outside of jail.

GH Spoilers: Sam McCall Gets Together With Maxie Jones

Sam has wanted to help Maxie Jones (Kirsten Storms). Maxie has had trouble with Peter August (Wes Ramsey) and her daughter Louise August (Odell-Diaz Twins). Sam knows that Maxie has been concerned about Peter being a part of Louise’s life. Sam has been worried about Maxie because she believes that Maxie does not know where Louise is. Sam has been trying to find Drew who was kidnapped by Peter. Sam may tell Maxie that there is a chance that Drew could be found and brought back home.

Maxie may find comfort knowing that there is a chance that Drew could come back to Port Charles and reunite with Scout and Sam. Maxie may want to find out if Sam wants to be with Drew again. Sam has been happy with her relationship with Dante. Maxie may be surprised to find out that Sam and Dante are in a relationship. Maxie had hoped that Dante would reunite with his ex-wife Lulu Spencer (Emme Rylan). Maxie may be unsure if Sam and Dante should be together.

General Hospital Sam may be able to help Alexis and Maxie. Sam will want to help Alexis to decide what she wants to do with her new found freedom. Can Sam help Alexis to find a way to get her live back on track? Sam may be able to help Maxie to feel that she does not have to worry about her troubles by telling Maxie about her relationship with Dante. Will Sam get Maxie to accept her relationship with Dante?