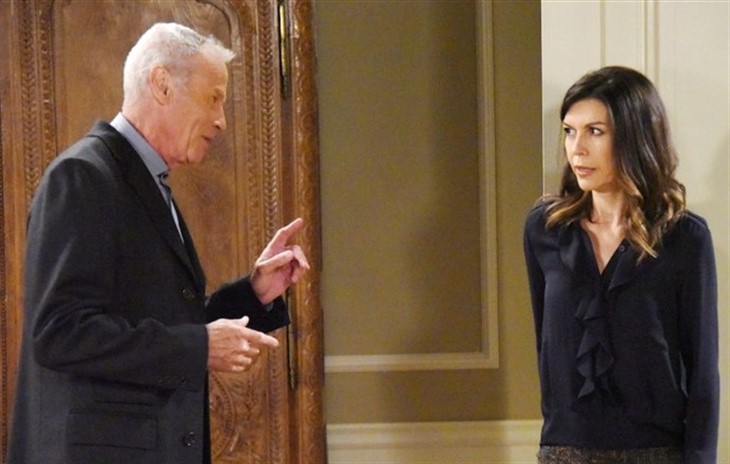 General Hospital viewers will recall that Robert is extremely disparaging of Valentin. But then, Robert does have a longstanding distaste for any Cassadine, and doesn’t seem to trust any of them. However, Robert didn’t like Dr. Hamilton Finn (Michael Easton) and didn’t trust him either when he and Anna were still together! Longtime General Hospital viewers will recall that Robert and Anna were married years ago, and have a daughter together – Dr. Robin Scorpio-Drake (Kimberly McCullough).

However, Anna and Valentin may have known each other even longer than she and Robert has – even though Anna, Robert and Valentin were supposed to have been in WSB spy school at the same time, Robert has never mentioned remembering “Ivan Theodore” which is what Valentin went by back then! Recently, General Hospital viewers have noticed that Robert seems to be more than just a little bit jealous over Anna!

General Hospital viewers will recall that Robert obviously still has feelings for his second wife, Holly Sutton Scorpio (Emma Samms) but has given up on her survival for the time being. General Hospital viewers will recall that Holly was supposedly killed and her burned body buried outside the casino in Monaco, where Dante Falconeri (Dominic Zamprogna) and Samantha McCall (Kelly Monaco) are investigating leads on Drew Cain’s (Cameron Mathison) survival now.

But viewers know that Holly is still alive, and was being kept in a nicely decorated bedroom similar to that which Liesl Obrecht (Kathleen Gati) found herself in after being kidnapped by Victor Cassadine (Charles Shaughnessy). Viewers will also recall that in the prison, possibly a dungeon under the original Cassadine mansion on Cassadine Island, there was another female prisoner screaming. The prisoner was mentioned to have recently had her accommodations downgraded, and is likely Holly, but for now Robert has given up on her still being alive and seems a little too attracted to Anna!

General Hospital viewers will recall that Valentin has loved Anna for years, even though he was fooled into a romance with her twin sister Alex Devane (Finola Hughes) years ago. This romance has been years in the making, even though ultimately Robert and Anna married shortly after graduation from spy school and went to work as WSB agents right away.

Valentin had as well, although over the years something went sideways for him and he wound up being a mercenary for many years. Longtime General Hospital viewers will recall Anna was a double agent for the WSB and its rival spy agency, the DVX, as Alex was also. The DVX possibly hired Valentin for the mercenary work he did as well, and it was revealed a few years ago that even Ryan Chamberlain (Jon Lindstrom) was in the DVX, probably as an assassin! The deeper Valentin and Anna get with one another, the more jealous Robert will become –and he will insert himself between them trying to break them up in future General Hospital episodes!