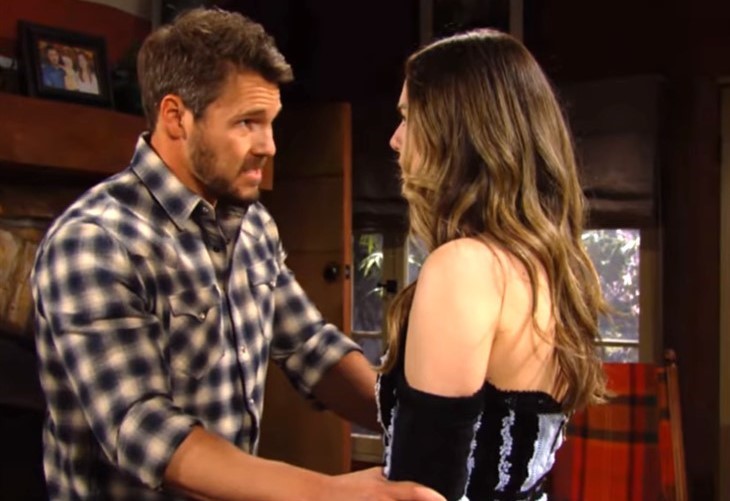 The Bold and the Beautiful (B&B) spoilers for Tuesday, October 12, 2021, reveal in Los Angeles Liam Spencer acting a little like Steffy Forrester, but is Liam as justified as his ex?

Hope (Annika Noelle) really thought she could invite her father back into her life with little interference from her family, but she was quite naive. Of course, she expected pushback from Brooke (Katherine Kelly Lang) and Ridge Forrester (Thorsten Kaye). After all, those two butt into everyone’s business and it’s not like Brooke and Deacon Sharpe (Sean Kanan) had such a loving relationship in many years, but Hope at least thought she’d have her husband’s support. How wrong she is!

On Tuesday, Liam demands that she never see her father again and Hope is incensed. It’s just that Liam can’t trust this guy after all the trouble he caused so many people for so many years, but he is no Sheila Carter (Kimberlin Brown). At least Steffy (Jacqueline MacInnes Wood) has good reason for wanting that crazy woman away from her family, demanding that Finn (Tanner Novlan) never see the woman who claims to be his mother.

Will Liam accept Hope’s pushback to his demands or will Hope and Finn have more things to bond over than ever now?

Sheila thinks she found the perfect partner in crime in Deacon and is thrilled he’s back in town. After all, they can help one another now. Deacon wants to get to know his daughter better and Sheila wants to finally know her son and her grandson. The two people getting in their way are Steffy and Liam so the best thing to do is get Steffy and Liam out of the way.

Deacon is definitely hesitant to team up with Sheila considering that he really does want to make an honest go of it with Hope and stay on the straight and narrow this time. But Deacon has never been a straight and narrow kind of guy. After all, he was married to Hope’s sister when he had an affair with her mother and that is how Hope came to be. So, when Sheila makes teaming up seem appealing, Deacon will have a very hard time saying no. Stay tuned to The Bold and the Beautiful weekdays to see how these stories play out.