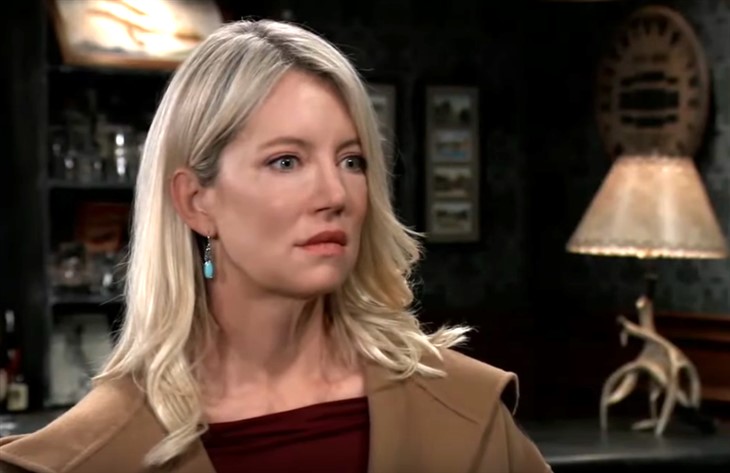 General Hospital spoilers tease that Nina Reeves (Cynthia Watros) will begin feeling guilty about the secret she is keeping on an upcoming episode of General Hospital!

General Hospital viewers will recall that Nina has been keeping secret for months that she knows Sonny Corinthos (Maurice Benard) is alive and that he has amnesia. He goes by “Mike” because when he was found in a snowbank after being washed out of a river that runs between New York State and Pennsylvania, he was wearing his late father, Mike Corbin’s (Max Gail) watch which had his name inscribed on it. His suit coat had been washed off so he had no wallet, no ID, no phone. In fact, as General Hospital viewers will recall, Sonny nearly died, and would have if his father didn’t come to him and tell him it wasn’t his time!

Sonny then passed out and had amnesia when he was found and brought to the clinic in Nixon Falls, Pennsylvania where Phyllis Caulfield (Joyce Guy) works. She helped nurse him to health, and recognizing his symptoms of bipolar disorder got him back on bipolar meds. Now “Mike” has been on a fairly even keel and has become a good friend and employee to Phyllis and her husband Lenny Caulfield (Rif Hutton). It wasn’t until a couple of months later, after Nina found out that Nelle Benson (Chloe Lanier) was her long-long daughter, with the help of Phyllis, who had been her nurse at Crichton-Clark, that she had enough of Jasper “Jax” Jacks (Ingo Rademacher) and Carly Corinthos (Laura Wright) and their collaborative lies and headed for Nixon Falls for a visit with Phyllis, after which she had intended to spend time at Serenity Springs Spa but never quite made it there! There she discovered “Mike” aka Sonny, started to call Carly with her discovery, but then decided against it because “Snarly” was her usual snarly self!

Perhaps Nina starts thinking about the repercussions for Sonny should he start getting his memories back and return to Port Charles. General Hospital viewers will recall that Carly had Sonny declared dead rather quickly, although she wasn’t quite ready to admit to herself he was “dead”. This, of course was for Corinthos business reasons, and now, months later, she is getting ready to marry Jason Morgan (Steve Burton) also for “business reasons”! They must present a united front to the Novaks, who are part of the Five Families and the latest to try and take over Sonny’s territory now that Cyrus Renault (Jeff Kober) has been taken down, and is likely in the federal prison in Leavenworth, Kansas.

There is an added complication that “Mike” and Nina are falling in love with each other, but even so, will his feelings for Nina stay when his memories return? With Carly remarried to Jason, and Sonny having no business holdings left in his own name, might he choose to stay in Nixon Falls, and if he does, with Nina whom he now loves? General Hospital viewers have seen how different Sonny is as “Mike” other than remembering how to make his pasta sauce, and how much more relaxed and happy he seems, other than finding out that Lenny is battling pancreatic cancer. Nina starts feeling guilty about the shock “Mike” might be in for should his Sonny memories return and he finds out everything is different. But on the other hand, maybe his new love for her and the lifestyle in Nixon Falls might be something he’d rather keep!