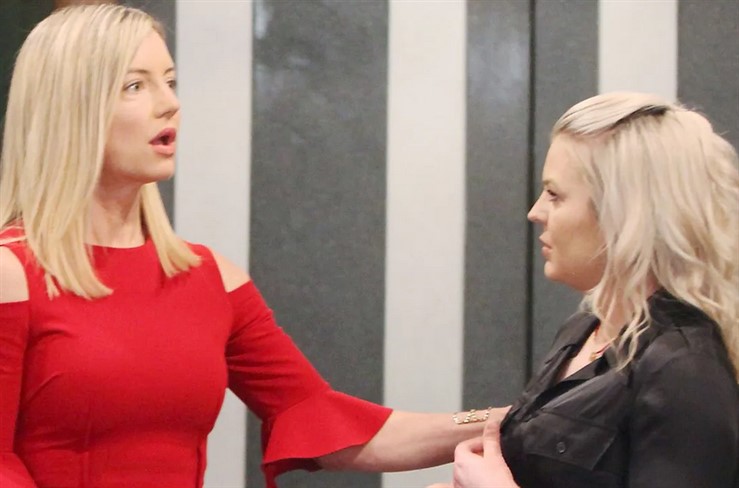 General Hospital’s Nina has lied about Peter’s existence for weeks. Nina took it upon herself to involve Liesl Obrecht (Kathleen Gati) and caused her to be kidnapped. Liesl was not only Maxie’s mother-in-law but also the grandmother of her son. Maxie lost her husband Nathan West (Ryan Paevey) and Liesl is one of the few connections left to him. Maxie would never want Liesl taken out of her son’s life. Maxie would not want Liesl to risk her life to go after Peter. However, Nina has put her in the position that she is in with Victor Cassadine (Charles Shaughnessy). Can Maxie forgive Nina if Liesl doesn’t survive? Should Nina have called someone else for help?

General Hospital’s Nina is one of the few people who know where Louise Jones (Harper and Scarlett Bloom). Louise is in danger not only because she is Peter’s daughter but because Valentin Cassadine (James Patrick Stuart) and Brooklyn Quartermaine (Amanda Setton) are raising her. Peter could easily go after Valentin’s daughter in place of his just like he threatened to kidnap James West (Owen and Curtis Rufca). Peter could have kidnapped all of Maxie’s children because of Nina. Does Maxie even realize that Peter could have taken her children from her parents as well? Peter also could have kidnapped Maxie and taken her from her children all because Nina stayed quiet.

General Hospital’s Nina has allowed Carly Corinthos (Laura Wright) and her family to grieve for months for a man that was alive. Maxie knows what it feels like to lose a husband and for her child to be without its father. Maxie also knows that Nina lost a child as well. How could Nina stand by and allow Sonny’s children to grieve for him? How could Nina allow Sonny’s wife to marry someone else? Maxie put a lot of time and energy into planning Carly and Jason Morgan’s (Steve Burton) wedding. Maxie will eventually realize everything that could have gone wrong. How will Maxie react once this knowledge settles in?

Once Maxie considers all the lives Nina has messed with she may realize that Nina has endangered her and her children. Can Maxie truly forgive Nina until she knows everyone is safe?