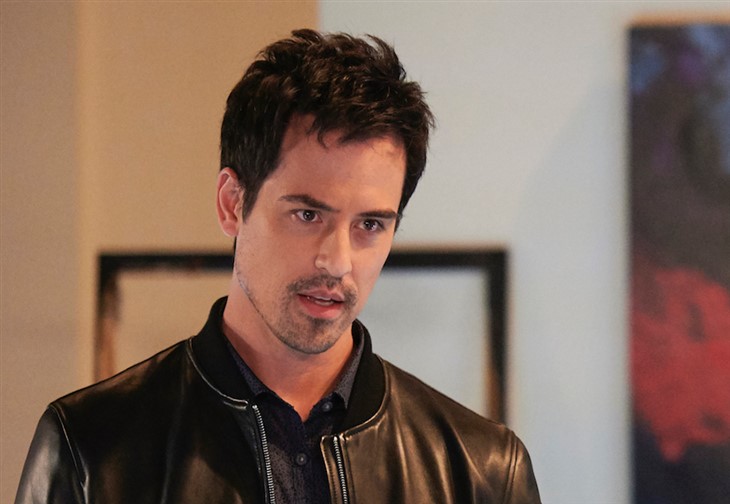 General Hospital spoilers tease that Nikolas Cassadine (Marcus Coloma) will be hopeful that his past won’t come back to haunt him in upcoming episodes of General Hospital!

General Hospital spoilers show that when Shawn Butler (Sean Blakemore) confronted Nikolas on the docks, after Spencer Cassadine’s (Nicholas Chavez) confrontation with him, Nikolas tried to pay him off. Nikolas didn’t want any more questions or investigation about his having put a hit out on Hayden Barnes (Rebecca Budig). Nikolas said Hayden wasn’t killed, and she left town, and that was that.

But, General Hospital viewers know that wasn’t exactly how it happened. A mother doesn’t just leave her little daughter with a birth father she barely knew to leave town because she chose to, and then there’s the murder of her mother, Naomi Dreyfus (Gigi Bermingham) that remains unsolved as well! Nikolas was the one who forced Hayden to leave town the last time, after he saw her making a deal with Valentin Cassadine (James Patrick Stuart)!

This was when Nikolas was still looking for the codicil to Mikkos Cassadine’s (John Colicos) will, disinheriting Valentin because he wasn’t his son but he was Helena Cassadine’s (Constance Towers) son.

GH Spoilers – Nikolas Cassadine Is Concerned Someone Will Mount A Search

If Hayden really is still alive somewhere, Nikolas shouldn’t be so concerned that someone will mount a search for her. General Hospital viewers will recall that when Nikolas came back to Port Charles, Hayden was with him. He didn’t seem concerned that she would out him as having put a hit on her then, and she apparently would have been able to identify her shooter prior to her coma.

Not a word, not a card, not a phone call has come for little Violet Barnes (Jophielle Love) since her mother disappeared. Then her grandma Naomi came and said she didn’t know what had happened to her mommy and was killed the next day! What a horrible thing to happen to such a sweet little girl!

General Hospital fans can pretty well be assured that Nikolas does indeed have concerns that his past might come back to haunt him! The last thing he wants is people nosing around in what he did, where he was, and who he may have been with from that time to this, including when he was missing and faking his death!

General Hospital Spoilers – Nikolas Cassadine Claimed Victor Cassadine Was Helping Him – Will He Turn On Him?

General Hospital recaps indicate that Nikolas had claimed that his not so dead great uncle Victor Cassadine (Charles Shaughnessy) had been helping him recover from his gunshot wound inflicted by Valentin Cassadine (James Patrick Stuart). General Hospital viewers will recall that Nikolas made this claim in a recent episode, but when Valentin shot Nikolas and he fell from that window on Cassadine Island, Victor was supposedly dead for a couple of years, and he was certainly not on the island!

Viewers will also remember that Nikolas had previously tried but failed to fake his own death and disappear, and it was Ava Jerome, now his wife Ava Cassadine (Maura West) who outed him, when they were on an airplane together and he was going by “Niall Carradine”! In recent episodes, Victor claimed to Valentin that he was his birth father – that news hasn’t gotten back to Nikolas yet, however.

Victor will settle in Port Charles after making some deals with the WSB and Port Charles District Attorney Robert Scorpio (Tristan Rogers). Question is, that pits Nikolas’ word against Valentin’s concerning the Cassadine legacy – Nikolas will worry if Victor will now turn on him and side with Valentin! That will certainly cause his past to haunt him!