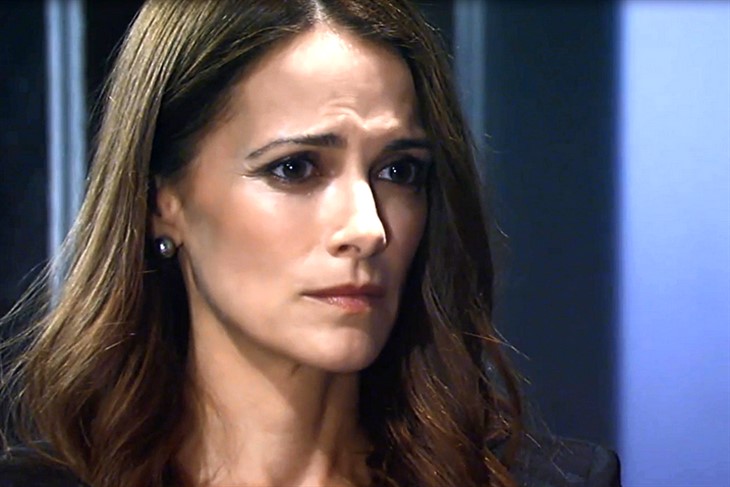 General Hospital (GH) spoilers tease that Holly Sutton (Emma Samms) is still being held captive by a mysterious captor. Robert Scorpio (Tristan Rogers) believes that his ex is dead so he is no longer looking for her. At the same time, Hayden Barnes (Rebecca Budig) is also missing, and her mom was just seemingly murdered after Sam McCall (Kelly Monaco) and Shawn Butler (Sean Blakemore) made in inquiries into Hayden’s whereabouts.

Is there a new threat coming to Port Charles that ties these two seemingly separate things together? Is it possible that Holly and Hayden are being held together?

General Hospital Spoilers – Holly Sutton May Have Been On To Something!

Holly was doing some work for the WSB when she was captured. While it’s possible that she was looking into someone like Jerry Jacks (Sebastian Roche), it’s possible she found someone new who could post a threat to the residents of Port Charles.

Whatever she found, it seems as though it was damning enough that she was taken hostage. But it may be that Holly has information that someone wants on General Hospital, which is the reason they are keeping her alive. It shouldn’t be long before Robert gets a clue that Holly is still alive. And that may kick off a brand new mystery.

GH Spoilers – Where Is Hayden Barnes?

When Hayden Barnes left Port Charles, she left no way to contact her. She left her daughter, Violet Barns (Jophielle Love) with her father, Dr. Hamilton Finn (Michael Easton) and hasn’t been heard from since. Hayden loves Violet fiercely and wouldn’t leave her, especially for so long. She left because she Nikolas Cassadine (Marcus Coloma) convinced her she was in danger from Valentin Cassadine (James Patrick Stuart), but what if there was someone else after her as well? Hayden, much like Holly has had a past as a con artist. What if she conned the wrong person and it’s the same person who has Holly?

General Hospital Spoilers – Is This All Connected To Drew Cain?

General Hospital spoilers show Drew Cain (Cameron Matheson) is about to send a message of warning to Sam. It seems as though the presumed dead (see there is a pattern here) Drew has run into some trouble and needs Sam’s help? Both Holly and Hayden are also missing or presumed dead, is there someone out there who is taking major Port Charles players off the board? If so, for what purpose?

Are Holly and Hayden’s absences connected? Does this have anything to do with Drew Cain? Is there a brand new villain about to hit Port Charles. If so, what does he want? Anything can happen in Port Charles so stay tuned to General Hospital airing weekdays on ABC. And don’t forget to check back right here regularly for all your General Hospital news, information and spoilers!