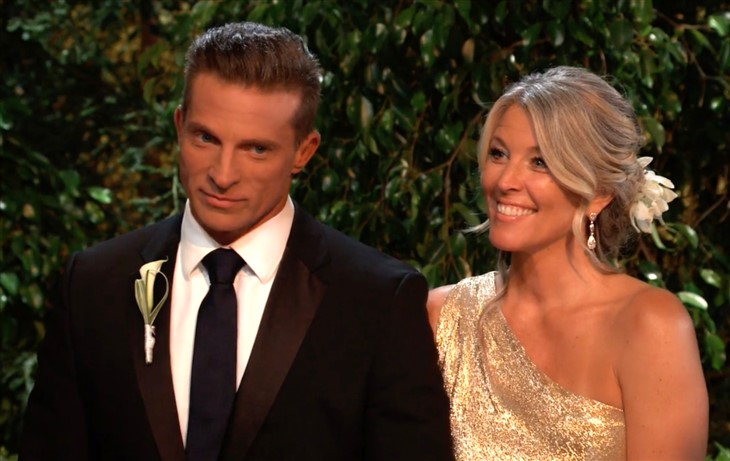 General Hospital spoilers for Monday, September 20, 2021, reveal a missing Jason and Carly. Maxie is frantic as she tries to figure out why they never made it to their own wedding reception.

General Hospital Spoilers – Can Jason Morgan Be That Dumb?

It’s hard to imagine that Jason Morgan (Steve Burton) and Spinelli (Bradford Anderson) wouldn’t have taken every contingency plan to make sure nobody was killed at their wedding. How they’d miss a bomb under the limo is beyond us and something tells us they didn’t. As the guests hear there was an explosion outside the church, we bet it was a decoy limo that exploded or else Carly (Laura Wright) and Jason definitely should NOT be running Sonny Corinthos’s coffee business.

GH Spoilers – Over In Nixon Falls…

Speaking of Sonny Corinthos (Maurice Benard), he is back and ready to rumble in Nixon Falls, as Smike is no more. He’s screaming in Nina’s (Cynthia Watros) face as she tries to explain herself and when Sonny is screaming in someone’s face, we know he is Sonny and nothing can change that. Can Nina come up with an adequate excuse for her seriously delusional actions?

Outside the hospital, it looks like Anna Devane (Finola Hughes) and Valentin Cassadine (James Patrick Stuart) finally made it to Nixon Falls after traveling all week to get there, apparently stopping to enjoy the scenery along the way. They want a piece of Peter August (Wes Ramsey) and Valentin wants to shoot him on site. Be our guest, Valentin. You go and complete that mission.

General Hospital Spoilers – We Get Quartermaine Drama Too

Brook Lynn (Amanda Setton) was apparently not invited to the wedding because she had to be home to watch Maxie’s (Kirsten Storms) baby while Maxie made sure the wedding actually happened. Chase (Josh Swickard) stops by to give a gift to Monica (Leslie Charleson). We suppose he wants to thank her for her hospitality. He also tells Brook he wouldn’t change the time they shared for anything. Will we finally get a pairing here?

Back at the wedding reception, Ned (Wally Kurth) and Olivia (Lisa LoCicero) are still arguing about Austin (Roger Howarth) and Olivia learns that Ned has been lying to her about something. What could it be? Stay tuned to General Hospital weekdays to find out.