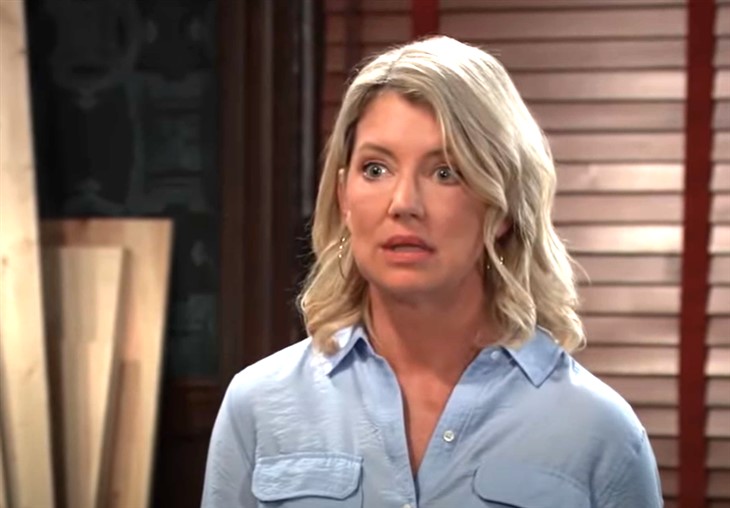 General Hospital (GH) spoilers for Monday, September 13, 2021, reveal Nina needing to think quickly once again because everyone wants something from her over in Nixon Falls.

General Hospital Spoilers – What Will Nina Reeves Do Now?

Nina (Cynthia Watros) just managed to get Jax (Ingo Rademacher) to leave her alone to tell Smike the truth on her own terms. And she was going to do it, too. Truly. But, of course, there’s Peter August (Wes Ramsey) to ruin everything as Peter August always does.

He must have figured out she sent him on a wild goose chase to Saint Lucia but Nina expected Liesl (Kathleen Gati) to finally take care of the Port Charles Peter Problem once and for all. It becomes obvious to Nina that Aunt Liesl did not, in fact, complete the mission, but she has no time to figure out why because she has to deal with Peter wanting to kill her. So many problems, so little time.

Will Sonny (Maurice Benard) walk in just in time and save Nina from certain death at the hands of a man she should have let Liesl kill three years ago when she left him tied to a bed all summer? Will Nina ever get the chance to tell Sonny the truth?

Back in Port Charles, a lot has to happen in this very long soap opera day before the long-awaited wedding takes place. Trina (Sydney Mikayla) and Josslyn (Eden McCoy) discuss Spencer (Nicholas Chavez) as they get ready for the big event and Trina confesses that Spencer has been lying about more than just his girlfriend.

Meanwhile, Nikolas and Spencer spend more bonding time at the Metro Court and Valentin (James Patrick Stuart) enters the fray. At one time, Valentin was thought to have killed Nikolas and they never quite resolved that. Will they do it now?

Valentin also spends some time with Anna Devane (Finola Hughes) when he has to inform her about a disturbing phone call he just got. Does Nina send out a smoke signal from the Pennsylvania side of the river?

Jordan (Briana Nicole Henry) got herself in trouble again and now she may end up back on dialysis. But at least she’s awake and Curtis (Donnell Turner) is there by her side. Then, Austin (Roger Howarth) walks in with news about her kidney and it doesn’t look good. Stay tuned to General Hospital weekdays to see how these stories play out.