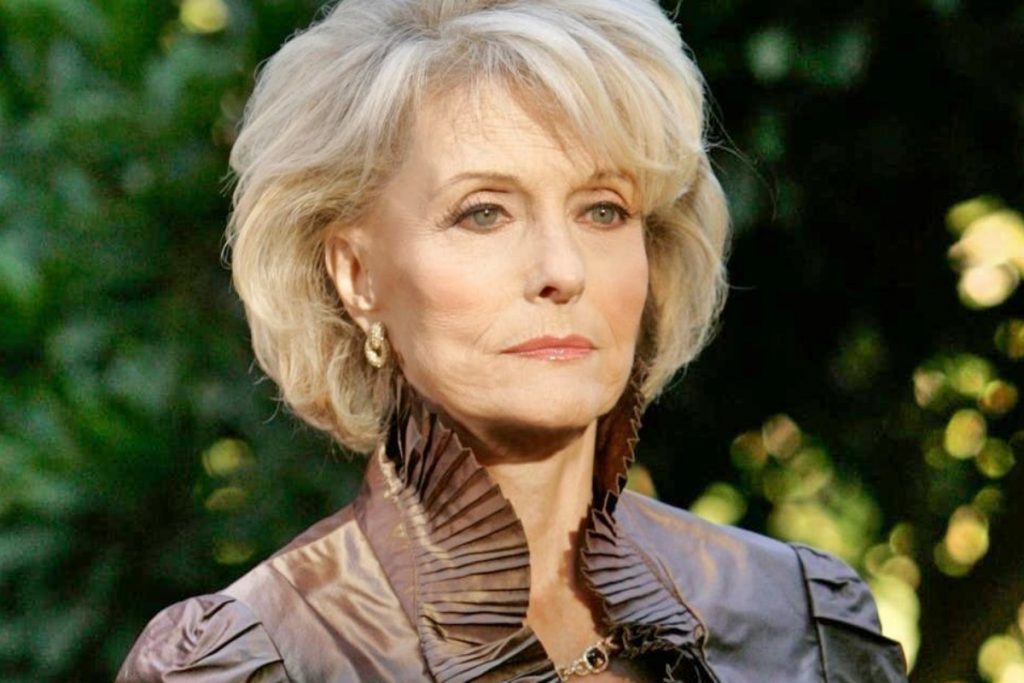 General Hospital viewers won’t be surprised to see more of Helena, since Victor Cassadine (Charles Shaughnessy) recently came back from the dead and there is the backstory of Valentin Cassadine’s (James Patrick Stuart) conception. General Hospital viewers could easily see some short scenes being filmed with Helena either as a ghost again or possibly a tape surfacing verifying her and Victor’s affair. The post gives a phone number to call to ramp up support for more Helena sightings on General Hospital. Anyone who wants to show support for Helena and wants to see more of her, can call the General Hospital Comment Line at 323-671-4583 and leave a message.

Refer to Executive Producer Frank Valentini and fans can also tweet him on Twitter @Valentinifrank. The post advises that the airdate will be posted when it is known. The post also requests that General Hospital fans on Facebook to share this information with any and all General Hospital and Helena Cassadine fans they may know. Ms. Towers would love for this to go viral, and many fans would love to see more of Helena. The idea is that hopefully the more the General Hospital powers that be hear from fans, the more likely they will be to keep Constance in mind for upcoming story lines.

Longtime General Hospital viewers will recall that the legacy General Hospital character of Helena Cassadine was actually created in 1981 for the legendary late actress Elizabeth Taylor, who was a fan! It was Elizabeth as Helena who uttered the now legendary line that became known as “Helena’s Curse” which was on Luke and Laura Webber Baldwin Spencer (Anthony Geary, Genie Francis). Considering that Helena’s will was read several years ago, where her curse appeared to have been transferred to Sam McCall (Kelly Monaco), all indications are that the many times resurrected Helena probably is really dead this time!

However, many opportunities in current storylines exist for the appearance of Helena as a ghost, or in flashbacks of someone’s memories, or in someone’s nightmares! Cassadine closets are full of skeletons, after all and anyone connected to the family, Cassadine or not, could be victims of an extended curse!

General Hospital viewers will see all kinds of opportunities for Helena to pop in for a ghostly appearance, flashback, or a nightmare! If fans tweet Frank Valentini or call the General Hospital comment line, perhaps these ideas could be suggested! For instance, as previously mentioned, the backstory of Victor and Helena’s affair could be played out, which Victor says created Valentin! Alexis Davis (Nancy Lee Grahn) has had many nightmares about Helena, and she could easily start having more with the reappearance of Victor! General Hospital viewers will recall that there was a figure depicted in Helena’s portrait, on the teapot, now gone up in flames, which many thought was Nikolas Cassadine (Marcus Coloma).

Nikolas could have caused her death by poisoning her tea, but that has never been proven – Helena could haunt his dreams, appear as a ghost, or Victor could produce a recording with Helena accusing Nikolas of the crime! Laura is going to be back in Port Charles soon and Helena could haunt her as well! General Hospital fans will agree, with five Cassadines – make that eight counting Alexis’ grown daughters – ten counting Sam’s kids – on screen now, Helena could definitely pop up and make mischief!

The Bold And The Beautiful Spoilers: Steffy’s Wisdom, Ridge Happiest With Taylor, But Will ‘Tridge’ Reunite?