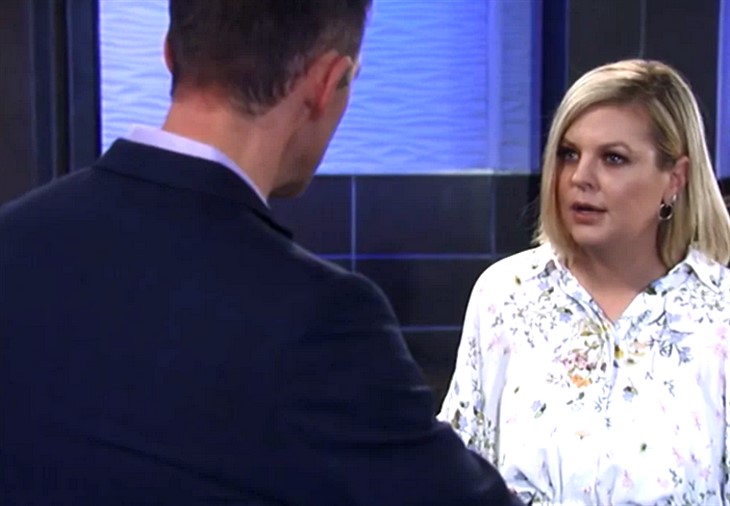 General Hospital spoilers reveal that Maxie Jones (Kirsten Storms) will come back to Port Charles. She immediately bumps into Valentin Cassadine (James Patrick Stuart), who has Bailey Quartermaine (Scarlett and Harper Bloom). Valentin hasn’t picked up on the truth about Maxie’s baby, but could he now start to suspect something is amiss?

GH spoilers reveal that Valentin has walked in before on Maxie visiting “Bailey,” who fans know is actually Louise “Lou” August. When Valentin interrupted one of Maxie’s visits with “Bailey,” he just assumed that Maxie missed her own child. However, Valentin is bound to figure out the truth at some point.

In soaps, the truth always comes out eventually. Maxie and Brook Lynn Quartermaine (Amanda Setton) do have good intentions. This is all to protect Lou from Peter August (Wes Ramsey). However, Nina Reeves (Cynthia Watros) now knows the truth and while she agreed to keep quiet, she feels Valentin should know the truth. That if he knew what was really going on, he would willingly have pretended the baby was his and Brook Lynn’s. Instead, he is growing more attached to a child that he thinks belongs to him.

General Hospital spoilers for the week of August 23 reveal that Maxie will come back to Port Charles. Right after returning, Maxie bumps into Valentin, who has Bailey with him. It is teased to be “gut-wrenching.” If Bailey is with Brook Lynn, then Maxie wouldn’t have to hide her feelings as long as nobody was around. However, it’s not the same with Valentin because he is being fooled along with everyone else.

Maxie might be able to cover or rush off claiming to be in a hurry. Chances are she will want to stop and get a good look at “Bailey,” though. She might even ask to hold the little girl depending on her emotional state. Another possibility is that Maxie might say the wrong thing or do something that Valentin picks up on.

As fans know, the truth will come out in the worst way possible, which suggests Brook Lynn and Maxie aren’t honest with him. Could the baby swap storyline be close to ending and if so, how will Valentin handle losing the child he has gotten so attached to? What does this mean for Brook Lynn and will it really be that easy for Maxie to get her child back? We will have to keep watching the ABC soap to find out how this storyline ends.

Y&R Spoilers: Mariah’s Family Gets Desperate – Sally Gets A Warning