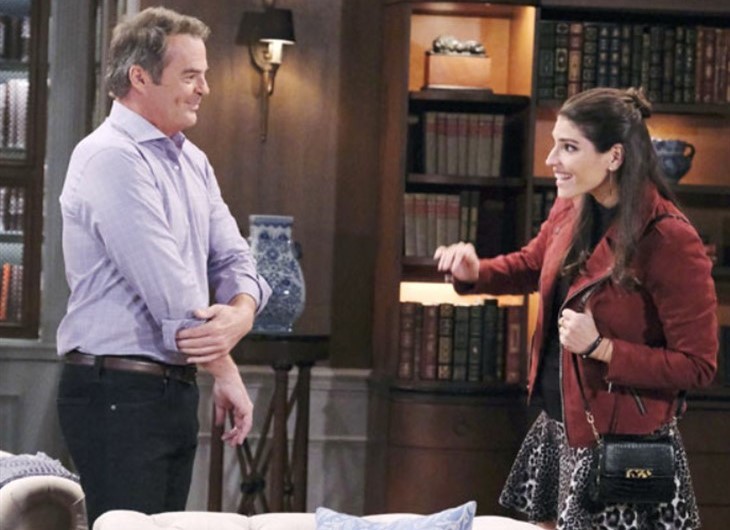 General Hospital (GH) spoilers and updates reveals in April, we learned that Brook Lynn (Amanda Setton) was faking her pregnancy (although some of you caught on before the rest of us!). We all know that she is doing this for the sake of ELQ. However, when Ned (Wally Kurth) finds out, what if he thought differently?

GH spoilers reveal Ned was really hard on Brook Lynn last year, so hard that she was kicked her out of the mansion. So even if they buried the hatchet, GH wild speculation reveals he might feel like she was secretly plotting revenge when he finds out about “Bailey’s” real mother. He might think that while Brook Lynn was in Bensonhurst, she was like, “Boy, was my dad a jerk to kick me out! He said he’s sorry, but sorry doesn’t even cut it! And he also had the nerve to judge me for sleeping with Valentin! Well, I’m going to get back at him with a fake pregnancy! He’ll be so happy to be a grandpappy, and when he finds out that it’s fake, his heart will be so crushed that someone will need to vacuum! So there! No one messes with BLQ! No one!”

Of course, when Brook Lynn’s scheme comes to light, she would explain to her Dad that she did this to pry ELQ out of Valentin’s hands. Nevertheless, it is possible that Ned’s initial thought would be that Brook Lynn faked her pregnancy to punish him for his misdeeds. Also, he would be hurt to find out that he’s not a grandfather after all.

Another possible event that could take place is that Ned rewards Brook Lynn. She is doing this not only for her family and their business, but also to help Maxie protect Louise/Bailey from Peter. Although Brook Lynn’s goal was to get her own ELQ shares back, there is no denying that she wanted to do right by her family after selling her shares to Linc to get out of her contract. General Hospital spoilers reveal Ned and the rest of the family will be so happy and proud of her that they will give her a Daughter of the Year reward and throw her a party like the one the Prodigal Son had when he returned to his father.

Of course, General Hospital Ned would still be disappointed that he is not actually a grandfather, but his happiness for his daughter owning up to her mistake might rule out his pain. Besides, Maxie will be so grateful to Brook Lynn and Ned that she will consider them as a second mother and grandfather to Louise/Bailey.

So, what do you think will happen when the light dawns on Brook Lynn’s lie? Will Ned feel like he was being punished, or will he understand that Brook Lynn did this to make amends and sing her praises? Please comment below!