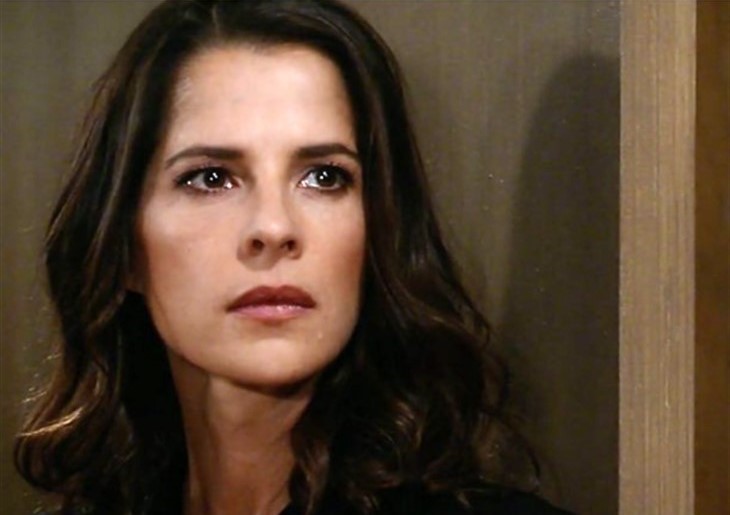 General Hospital spoilers say that in Port Charles, NY Sam McCall (Kelly Monaco) has certainly had a year that she’s not going to forget. After she was imprisoned for supposedly killing controversial cult leader Shiloh Archer (Coby Ryan McLaughlin), she tried to pick up the pieces of her life again by starting things over with Jason Morgan (Steve Burton).

But if there’s one thing that we’ve learned about Sam and Jason’s relationship over the years, it’s that it’s just as hot as it is cold. If that weren’t enough, this year also saw her getting Damien Spinelli (Bradford Anderson) to do some stalking on her behalf, she slapped Julian Jerome (William DeVry) across the face, impersonated Helena Cassadine and contacted Peter August (Wes Ramsey) presenting to be her to blackmail him with Spinelli’s help. In other words, it’s all what she does in a day’s work, right?

With that said, fans are hoping to see some significant changes in Sam McCall in the new year. Here are four changes that fans want to see in Sam. Check it out below and let us know what you think.

Out with the old and in with the new, right? The New Year will give Sam McCall an opportunity to not only clean her closet out of all the drama she’s hard to deal with these last several months, but also reassess where she wants to go next and if her final destination truly is Port Charles.

General Hospital Spoilers: Sam Fed Up With Alexis Davis’ Tactics And Makes A New Plan To Save Mom

#2 Have A Heart-to-Heart Conversation With Jason Morgan

Many General Hospital fans would agree that the relationship between Jason Morgan and Sam McCall is one similar to father and daughter, as Jason often chastised Sam this year for being an unruly little girl who couldn’t follow the rules of her probation. Sam needs to have a heart-to-heart conversation with Jason about how she really feels.

#3 Give This Girl A Pair Of Stiletto Heels

What’s up with all the drab clothing? We get it that Sam spent some time behind bars but this is the same woman that was once considered the sexiest woman on daytime television. It’s time for the wardrobe department to give Sam a sexy red dress and stiletto heels and let her live a little again.

#4 Find The Truth About Drew Cain

Let’s face it: the entire daytime community misses seeing Billy Miller on the canvas. It’s about time that someone find out if Billy is indeed dead or alive, and that person might as well be Sam McCall.

The Young And The Restless Spoilers: Sally’s Ambitions Frustrated – Love and Success Hard To Find