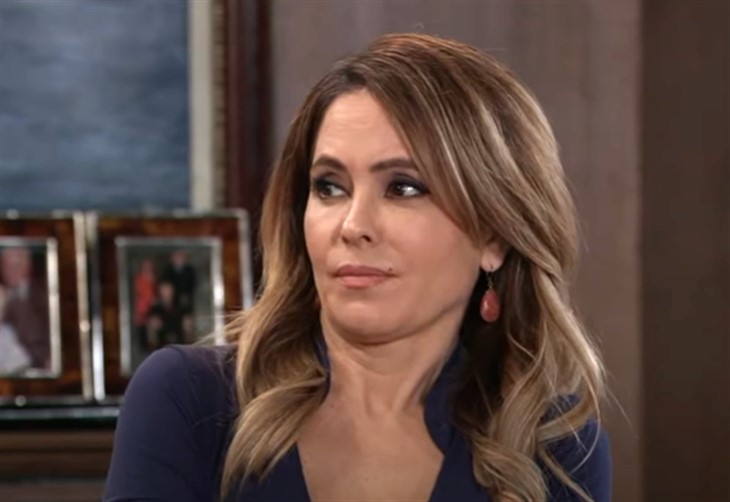 General Hospital viewers will recall from a recent episode of General Hospital that Brook Lynn buttonholed Austin about his suspicions that Leo could be on the autism spectrum. Brook Lynn was trying to get leverage over Austin and his contesting of Edward Quartermaine’s (John Ingle) will by getting him to violate HIPAA rules. She managed to get him to admit it by bringing up the subject to him and telling him she knew that Ned Quartermaine (Wally Kurth) was looking up information on the autism spectrum.

Brook Lynn was at General Hospital and didn’t realize Olivia was nearby and heard everything! This is the first time that Olivia is hearing what Austin is actually concerned about regarding Leo’s symptoms, and she tears into Brook Lynn immediately! General Hospital viewers will recall that Olivia was already offended that Austin had even treated Leo for his cut finger, having gotten on the Quartermaine bandwagon of Austin being a fraud and an interloper!

General Hospital viewers will recall that Olivia is already highly offended and won’t even listen to Ned about taking Leo to a specialist! She absolutely refuses to think her youngest son is anything less than perfect! Ned hasn’t been able to get a word in edgewise on the subject of Leo seeing any kind of specialist and Olivia hasn’t even heard the word “autism” brought up. The first time she hears it is when she overhears Brook Lynn getting Austin to admit he’s concerned that Leo may be on the autism spectrum!

Olivia rips into Brook Lynn, and doesn’t even grasp what Brook Lynn is talking about trying to trick Austin into doing something that the Quartermaines can use against him to get his medical license revoked! Olivia goes off on her and offense doesn’t even cover it. She rants about Brook Lynn and the Quartermaines first accusing little perfect Leo of having medical issues and then talking about the company in the same breath! General Hospital viewers will see Olivia realize that the Quartermaines are different from herself, and that “their people” are not like “her people”!

General Hospital viewers can understand Olivia’s not wanting to hear about any medical problems that could be serious in Leo. Longtime General Hospital viewers will recall that Leo was conceived during a drunken one night stand with Julian Jerome (William DeVry) one New Years’ Eve, and Olivia was still having psychic premonitions after accidentally being injected with LSD at that! Olivia had these visions for quite some time after Heather Webber (Robin Mattson) injected her with that syringe, and it would be easy for viewers to imagine Olivia could blame that for Leo’s autism, as well as her conceiving him while drunk. However, neither of these things could cause Leo’s problems. It may take a while for her to even listen to the possibility, and Ned might have to sneak Leo into a specialist while setting up a diversion for Olivia!

Days Of Our Lives Spoilers: Is There Still A Chance For Rafe And Nicole?