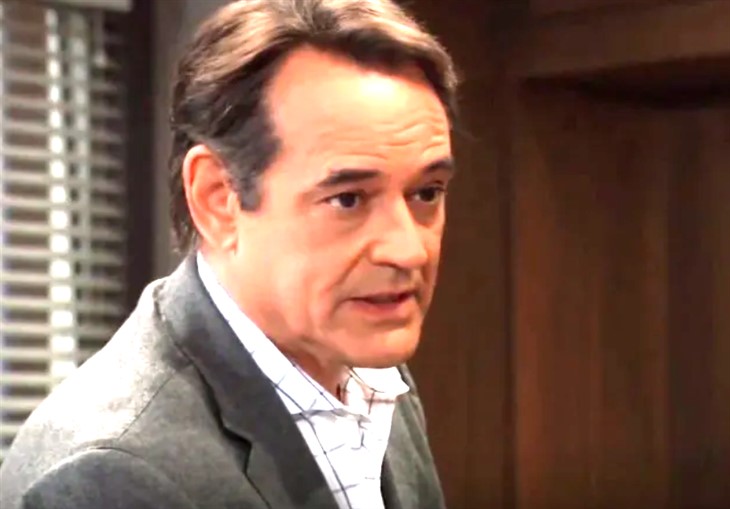 General Hospital Spoilers tease that Dr. Kevin Collins (Jon Lindstrom) has a blind spot when it comes to his twin brother, serial killer Ryan Chamberlain (also Jon Lindstrom). But does he know why Esme Prince (Kristen Avery Pohl) is so infatuated with Ryan. Ryan has kept pertinent information about Ryan a secret before. It only stands to reason that Kevin knows more than he is saying,

Esme came to town suddenly. She has apparently been here the entire time that Spencer was, meaning all the way back to when Ava Jerome (Maura West) and Nikolas Cassadine (Marcus Coloma) started receiving gifts from their stalker, last Valentine’s Day. It’s known that she was the one who set fire to Ava’s car. In addition, Esme seems to have a connection to Ryan, since she is so obsessed with him. She also seems to have no use for Kevin, much the way Ryan didn’t.

All the signs are pointing to a familial connection between Ryan and Esme. More than likely she is his daughter. Kevin is likely aware that Ryan had a child out there somewhere although he may not who it’s Esme. At least not yet. But look for Kevin to do some digging and to find out the truth. And given Kevin’s past habit of keeping Ryan’s secrets, he will keep Esme’s secret at least for awhile! Kevin likely doesn’t know that Esme is Ryan’s just yet, but that information should be coming soon. The question is how long will Kevin hold on to that information before it comes out?

If Esme is Ryan’s daughter and covers it up, even for a short amount of time, look for his wife to be furious. Laura Collins (Genie Francis) is currently in witness protection because Cyrus Renault (Jeff Kober) ordered a hit on her and their brother, Martin Grey (Michael E Knight). But once Laura finds out who Esme is and how much of a threat she is to Nikolas and Spencer, it may mean the end of Kevin and Laura’s marriage.

Is Esme Ryan’s daughter? Does Kevin know? How will Laura react when she discovers the truth? Anything can happen in Port Charles to stay tuned to General Hospital airing weekdays on ABC. And don’t forget to check back right here regularly for all your General Hospital news, information and spoilers!