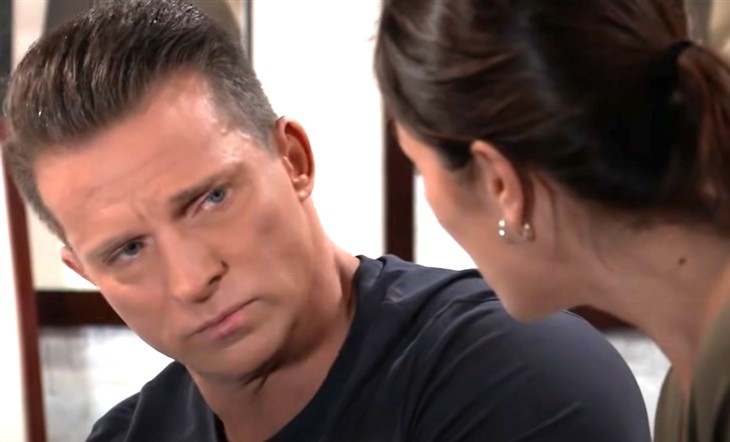 General Hospital (GH) spoilers indicate that in Port Charles a heartbroken Jason Morgan (Steve Burton) will run into Britt Westbourne (Kelly Thiebaud) and explain how he has lost Carly Corinthos (Laura Wright). Will Britt feel sorry for Jason and take him back?

General Hospital’s Jason was very attracted to Britt before he was forced to choose to get married. However, now that Carly is no longer in the picture, or in danger, will Jason try to reconnect with Britt? Jason and Britt found a connection while running from the law and Cyrus Renault (Jeff Kober). However, Jason broke things off to marry Carly to save her life. Jason and Britt were looking forward to dating and seeing where their relationship was going but that all changed in an instant. Now that Jason is free again, the two could pick up where they left off. Does Britt have better things to do than help Jason pick up the pieces of his life?

General Hospital’s Jason needs a shoulder to lean on after admitting that he loves Carly. After all, Sonny Corinthos (Maurice Benard) is home and Carly is back in his arms. Jason and Carly had let themselves plan a life together and admitted to feelings they had hidden for years. Now suddenly the rug has been jerked out from under Jason much like it was years ago when he found Carly in bed with Sonny. Jason has been truly hurt by this development even though he is glad his friend is home. Will Britt be the one to pick up the pieces for him?

General Hospital’s Britt was crushed when Jason left her and their relationship for Carly. Britt had hoped for a future with Jason after their time on the road. Jason and Britt had returned to town and hoped to explore the feelings that have developed between them. However, the way Jason simply dropped her without a second thought would make anyone leary of a relationship with Jason. Britt may have her faults but she doesn’t deserve to be thrown out like yesterday’s garbage. Britt, just like any other woman, should not be pushed aside for someone else like Britt was. Britt deserves to have a man who cares about her and puts her first. Will Jason and Britt try again?

Britt will need help to save her mother and Jason is ready and willing to go to her aid. Will Jason join Britt in Greece and help save her?