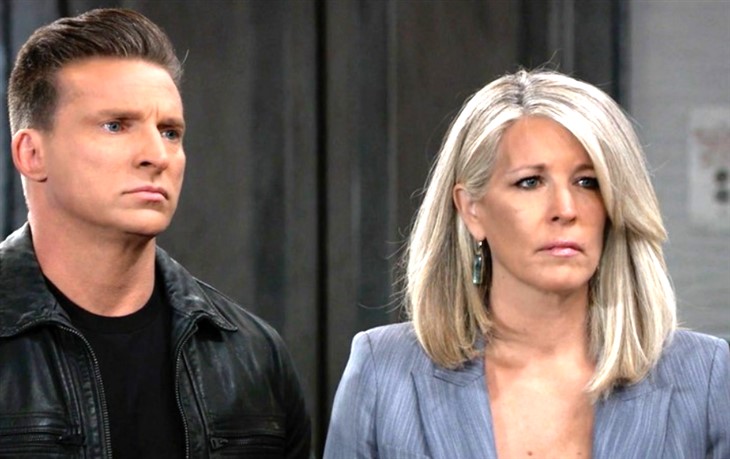 General Hospital (GH) spoilers tease that in Port Charles, NY Carly Corinthos (Laura Wright) is ecstatic to see her husband, Sonny Corinthos (Maurice Bernard) alive and well. For the last several months, Carly and the rest of Port Charles have believed Sonny died last December after an altercation with Julian Jerome (William Devry). But Sonny had amnesia and will living a simple life as a bartender in Nixon Falls going by the name of “Mike”.

But in the days and weeks leading up to Sonny’s return, Carly and Jason Morgan (Steve Morgan) were forced to get engaged and eventually married due to complications with the mob business that Sonny had been in charge of in Port Charles. All that time together made Carly fall in love with Jason all over again, as she had in the past. Jason, for his part, also said that he loved Carly. So now that Sonny is back, Carly has returned to her role as his dutiful wife. But feelings like love don’t just disappear, so Carly will understandably be conflicted.

GH Spoilers – Can Carly Corinthos Just Turn Off Her Love For Jason Morgan.

But both Sonny and Carly are going to discover that they just can’t put the last few months behind them. Carly will still love Jason, as well as her husband, so its going to be tough for her to sort through all those emotions. And although Carly doesn’t know it yet, Sonny as “Mike” also found love, with Nina Reeves (Cynthia Watros). Both of them will certainly have residual feelings that may or may not fade with time.

Carly may have loved Jason romantically for quite awhile, but she put those feelings aside, mostly. Even so, she has never really wanted Jason romantically involved with anyone else. She grudgingly accepted that Samantha Morgan (Kelly Monaco) with whom Jason had been with for many years. But it didn’t come quickly or easily. It’s quite possible Carly has loved Jason even more than she realized and when they got married, those feelings have been amplified even more. Only time will tell if her feelings for Sonny have changed.

Can Carly just forget about her love for Jason? Was it real for the both of them? Has Carly always been in love with Jason? Only time will tell, so stay tuned to General Hospital airing weekdays on ABC. And don’t forget to check back right here regularly for all your General Hospital news, information and spoilers!

Days Of Our Lives Spoilers: John Has The Fear Of The Devil In Him