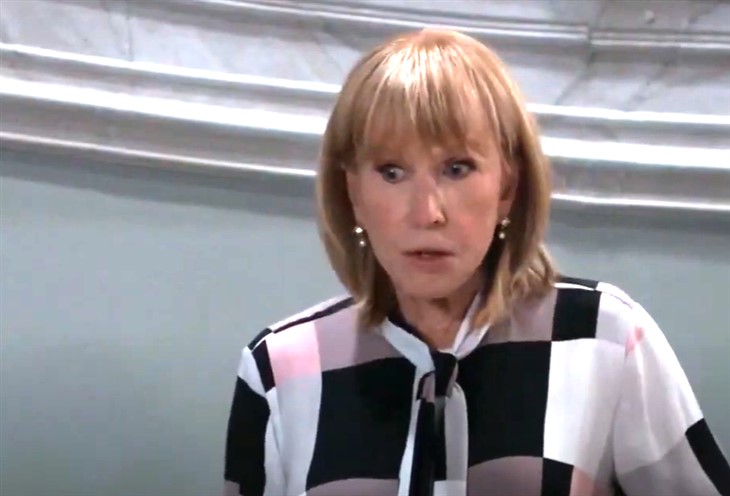 General Hospital Spoilers tease that Monica Quartermaine (Leslie Charleson) hasn’t gotten wind that Drew Cain (Cameron Matheson) is possible alive. It’s probably good that no one got Monica’s hopes up too early, but it seems almost a certainly to those investigating that Drew is alive. But Chloe Jennings (Phoebe Kuhlman) managed to escape from the same prison where Drew is being held, so Monica will find out soon enough. But she likely won’t be able to do nothing, so she will enlist help!

General Hospital Spoilers – Jason Morgan Can Certainly Use The Distraction!

Drew’s twin, Jason Morgan (Steve Burton) just married Carly Corinthos (Laura Wright) but on their wedding night, Carly long-lost Sonny Corinthos (Maurice Bernard) turned up alive and well. That means Carly is still married to Sonny barring any legal complications. Monica will certainly want Drew home, but she will also know that Jason can use a distraction from all of that drama. So look for her to implore Jason to bring his brother home. And Jason won’t be able to say no to Monica!

GH Spoilers – Jason Morgan And Dr. Britt Westbourne Might Be On A Collision Course!

As viewers know, Dr. Leisl O’Brecht (Kathleen Gati) was recently kidnapped by Victor Cassadine (Charles Shaughnessy). This means that Drew and O’Brecht are likely soon to be cellmates. O’Brecht’s daughter Dr. Britt Westbourne (Kelly Thiebaud) is likely going to follow every clue to find her mother. And with Jason searching for Drew, they might find themselves together again. Whether than means they have a romantic future is up in the air. Jason hurt Britt badly, and she may not be so quick to take him back.

Victor is a formidable opponent. And quite deadly. He’s been working with Peter August (Wes Ramsey) all this time. Which means that Victor has eyes and ears everywhere. Britt and Jason may only be able to bring their loved ones home if they work together. And since it was an adventure that brought Britt and Jason together in the first place, this might be the beginning of a reconciliation.

Will Monica find out that Drew is likely still alive? Will she ask Jason to bring his brother home? Will this lead to a collision with Britt? Anything can happen in Port Charles, so stay tuned to General Hospital airing weekdays on ABC. And don’t forget to check back right here regularly for all your General Hospital news, information and spoilers!

Days Of Our Lives (DOOL) Spoilers: The Truth About MarDevil Revealed