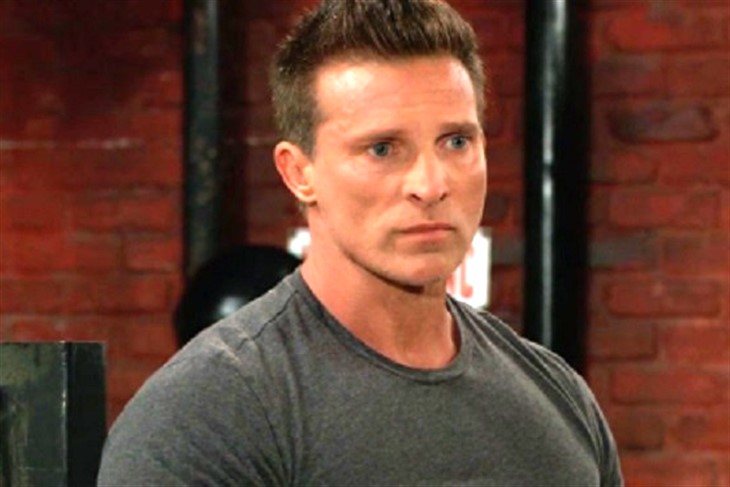 General Hospital spoilers and rumors tease that Jason Morgan (Steve Burton) will be torn between duty and love, and he may get cold feet at his and Carly Corinthos’ (Laura Wright) wedding in a future episode of General Hospital!

General Hospital viewers will recall that the decision to break up with Britt Westbourne (Kelly Thiebaud) was not arrived at easily by Jason. But duty to the Corinthos family and his “late” friend and employer Sonny Corinthos (Maurice Benard) called, and as General Hospital viewers will recall, he made the decision to marry Carly Corinthos (Laura Wright) as basically a power play. It wasn’t about love – it was about business, and as he explained to Carly, either he would have to marry her or he would have to kill her. That is the mobster way, and what would be expected by the Novak crime family, who had already made a play for Sonny’s territory. First they diverted a Corinthos coffee shipment in New Jersey, then they blew up one of the Corinthos warehouses in Port Charles. But it killed him to have to break up with Britt!

Longtime General Hospital viewers will remember that once upon a time, many years ago, Jason and Carly were lovers. This was before she became involved with Sonny, and Jason was once her brother-in-law during the very short time that she was married to AJ Quartermaine (Sean Kanan) who was Michael Corinthos’ (Chad Duell) birth father. But Carly and Jason both have moved on many times since then, although they have always remained each other’s best friend and loyal ally. Jason even helped care for Michael when Carly suffered from postpartum depression and was unable to care for her newborn herself. There are no doubts in General Hospital viewers’ minds that Jason would do anything for Carly, and she for him.

Even though Carly still loves Sonny and Jason loves Britt, General Hospital viewers know that Jason will be willing to do what he has to in order to protect Sonny’s territory and family. It was Jason’s idea and the point hit home even more strongly recently when Joey Novak (Patrick Zeller) approached Cameron Webber (William Lipton) and Josslyn Jacks (Eden McCoy) in Kelly’s. As Josslyn was notifying Carly, which upset her father Jasper “Jax” Jacks (Ingo Rademacher) greatly, Jason found out from Cameron.

Cameron was in Volonino’s Gym trying to murder a punching bag and Jason got him some gloves and gave him some tips, and got him to tell him what was bothering him. General Hospital viewers will recall that Novak, of course, is a member of Novak crime family and knew all about Cam and Joss, where they went to school, and claimed he was an “associate” of Carly and Jason’s! Carly still loves Sonny and Jason still loves Britt, but they have to go through with the wedding and not just display themselves as engaged!

GH Spoilers And Rumors – The Big Day Has Come

Obviously, Jason and Carly will have to have a big and public wedding. They cannot simply elope – or say that they have – and appease the Novaks! At some point, the Novaks or at least one of them – probably nosy Joey – will show up at Jason and Carly’s wedding to verify the wedding took place. His uncle, Vincent Novak (Glenn Taranto) may show up with him, and other henchmen of the family.

General Hospital viewers will soon see Jason and Carly set a wedding date and likely announce it at a meeting of the Five Families, which they will also discuss setting up soon on General Hospital. Perhaps someone else will also be in the room, and Jason and Carly will spot them. Jax will want to be there to help protect Joss, and Britt may be with him! As Jason and Carly get ready to say their “I do’s”, Jason may spot her, and it won’t be surprising if he feels torn between love and duty and gets cold feet before he and Carly are pronounced husband and wife, even if only momentarily!