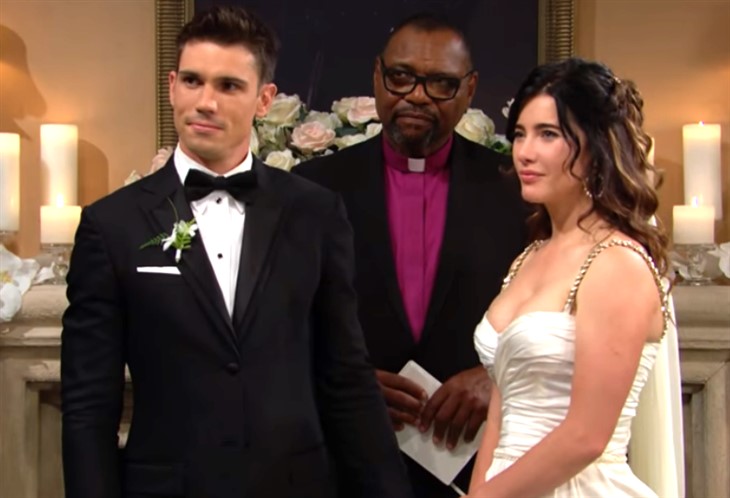 The Bold and the Beautiful (B&B) spoilers for Friday, August 6, 2021, reveal that Steffy and Finn are getting married, but they’re not out of the woods yet.

Steffy (Jacqueline MacInnes Wood) finally got the wedding ceremony of her dreams and she didn’t even have to use a zipline to get there. Ridge (Thorsten Kaye) gave a tender speech, Hope ran down the aisle for some unknown reason, and Kelly was absolutely adorable grinning at her released-from-jail dad, Liam. On Friday, Steffy and Finn (Tanner Novlan) say their I dos and become man and wife at least — or at least after just about a year of knowing one another. They even have a baby together who is nowhere in the room when his parents wed.

What could be better? Not much. But what could be worse? A lot. And all that can be worse comes in the form of Sheila Carter (Kimberlin Brown)

Jack Finnegan (Ted King) was sure that Finn’s bio mom showed up before the wedding, but that was actually the bride’s Aunt Pam (Alley Mills) making an odd entrance. However, Jack’s fears do come true when Finn is alone in a room and a strange woman approaches. He wants to know who she is and she finally confesses she is his real mother.

Of course, longtime CBS soap fans will recognize her as Sheila Carter, the nurse-turned-sociopath who was obsessed with The Young and the Restless’ Lauren Fenmore (Tracey Bregman) and stole her baby — who grew up to be Scott — way back in the 1990s. She’s been presumed dead a few times and we don’t even think Lauren knows that she is actually alive. She was even married to Eric Forrester (John McCook) at one time.

In fact, the last time we saw her she was serving up some pasta in Los Angeles at Il Giordino. Did she leave town since then and return just for this occasion? And who is Finn’s real father? Could it be Jack or is it one of Sheila’s conquests? Curious soap opera fan minds want to know. Stay tuned to The Bold and the Beautiful weekdays to see how this story plays out.