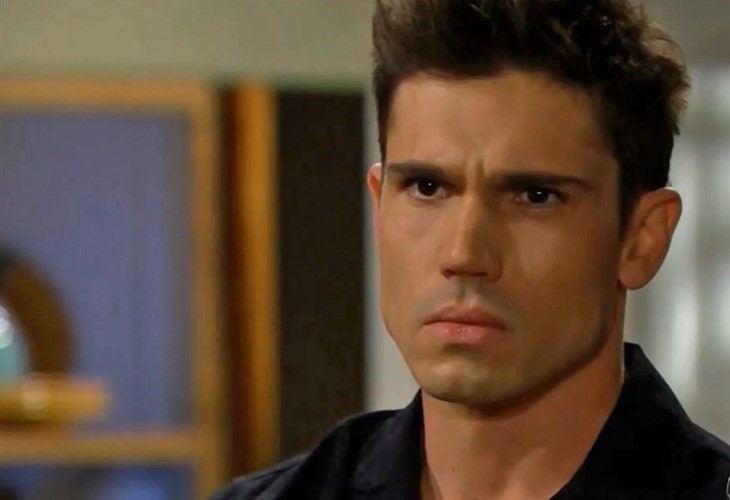 The Bold and the Beautiful spoilers document that John Finn Finnegan (Tanner Novlan) does not believe Sheila Carter (Kimberlin Brown) is lying to him. He thinks the love match with Deacon Sharpe (Sean Kanan) is legitimate.

Finn’s ask to Hope Spencer (Annika Noelle) was revealing. He wondered aloud why his mom and her dad would lie? What would they have to gain?

As fans have seen, Sheila believes that if she and Deacon can work together they will be able to reach the mutual goal of being part of their children’s lives. But Sheila also revealed to Deacon this plan could include Hope splitting from Liam Spencer (Scott Clifton) and Finn splitting from Steffy Forrester (Jacqueline MacInnes Wood).

Sheila knew that Finn and Hope would run and tell Steffy and Liam what they witnessed at Il Giardino. That was part of her impulse plan.

Deacon was too shocked by what happened to do anything other than going along with what Sheila was saying. Finn and Hope were perplexed when witnessing the highly unlikely nature of their parents’ apparent pairing.

Sheila believes that Finn and Hope are primed to become Shecon defenders. That would put them at odds with their spouses and spark marital discord.

Deacon is being taken advantage of by Sheila. She knows that he does not have an optimistic outlook and appears to be convincing him that Shecon is his best chance to build a relationship with Hope.

The recent release from prison has been followed by a lack of job prospects and no place to live. Is that how someone who has paid his debt to society would be treated in modern Los Angeles, California?

With whatever the answer, TPTB crafted a down-on-his-luck character who is living in a film noir. Deacon seems destined for failure with a return to prison more likely than not as long as he remains tethered to Sheila.

As devoted fans recall, Jack Finnegan (Ted King) has not informed Finn that he is his real father. Jack told Li Finnegan (Naomi Matsuda) that Finn was a baby in need of adoption. While that was true, King’s character did not add that the birth mother was Sheila and that she gave birth to his child, Finn.

Finn will be disillusioned when he learns the truth. Sheila will play this card when it is most advantageous.

Whether Sheila and Finn can become like mother and son is unknown. Deacon is a means to an end. If he manages to connect with Hope, then Sheila will want to collect on that perceived debt.