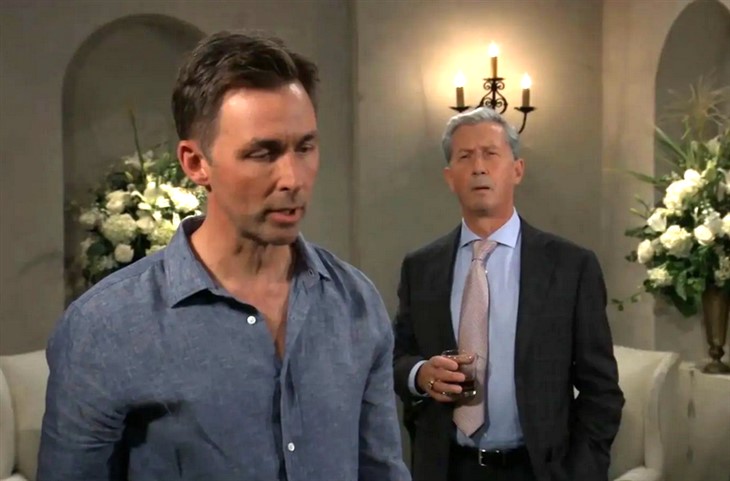 General Hospital spoilers and rumors tease that the force of the Cassadines combined may finally end Peter August (Wes Ramsey) once and for all in future episodes of General Hospital!

The Cassadine Thanksgiving that seemed more like a Quartermaine Thanksgiving minus the pizza, Victor was adamant that the family could be stronger with a united front against what’s coming after them-it seems like perhaps that should be a “who” instead of a “what”. General Hospital viewers will recall that Victor told Valentin Cassadine (James Patrick Stuart) while he had him captive in the Cassadine compound in Crete, that he was only playing along with Peter – who had certain things Victor had wanted.

However, it all backfired on him when he found Peter to be a liar and a thief, all along having the “key” to activate and deactivate Drew Cain’s (Cameron Mathison) conditioning. Peter had told him he didn’t, the “key” being tarot cards used with commands. Peter said it was a backup method his father, Cesar Faison (Anders Hove) had invented in case the regular programming that was used when Helena Cassadine (Constance Towers) to make super soldiers out of Drew and Jason Morgan (Steve Burton) didn’t work.

GH Spoilers And Rumors – Peter August Was After Victor Cassadine And Valentin Cassadine, He Could Be After All The Rest Also

General Hospital spoilers tease Peter was after Victor and Valentin, he could be after the rest of the Cassadines as well…even Spencer Cassadine (Nicholas Chavez) and Alexis Davis (Nancy Lee Grahn) and her daughters. Peter could also find a use for Nikolas Cassadine (Marcus Coloma) and indeed, may have knowledge that he could use against Nikolas too to control him; or, he could brainwash any of them! As General Hospital viewers will recall, that is what he did to Victor’s henchmen, and made them all his own henchmen!

General Hospital Spoilers And Rumors – The Cassadines Combined Could Destroy A Deadly Deceiver!

Longtime General Hospital viewers will recall when the Cassadines first came on the scene, and Victor’s older brother Mikkos Cassadine (John Colicos) invented a weather machine that could destroy the world by freezing – using a diamond called “The Ice Princess”. Surely if one Cassadine, Mikkos, could invent something that destructive and deadly, the force of all the remaining Cassadines together could destroy a deadly deceiver like Peter! Peter resorts to common blackmail many times to get his way, and while he may know a few things he could use as leverage against Valentin, Victor and Nikolas in particular, he just thinks he’s “good” – Victor knows he isn’t THAT “good”!

He made the mistake of trusting the double crossing Heinrik Faison and look what it got him. Victor cannot afford to make that mistake again! Victor is the one with the power, because he has immunity granted him by the WSB and there is nothing that Peter can hold over him! General Hospital viewers know that what Peter might have in leverage, the Cassadines have more in numbers, and that will be his downfall – the cunning of the Cassadines will catch the rat in his own trap!