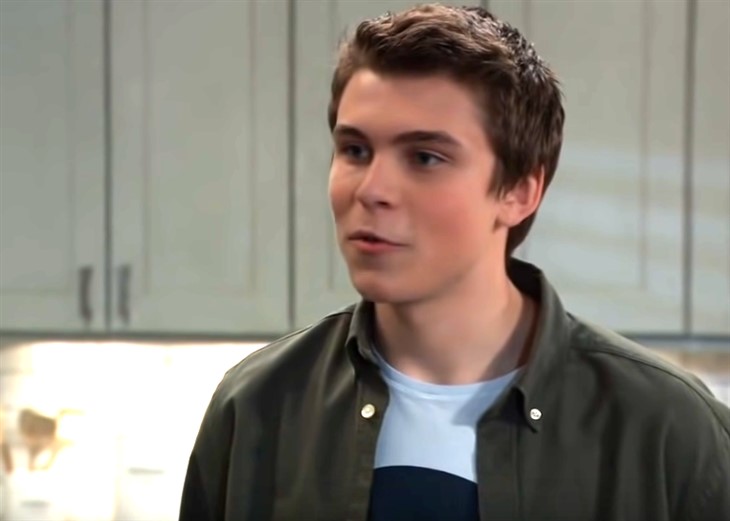 General Hospital Spoilers tease that Spencer Cassadine (Nicholas Alexander Chavez) is about to make his presence known in Port Charles once again. Spencer has been oversea attending school for the past several years under the watch of his grandmother, Mayor Laura Collins (Genie Francis).

His father Nikolas Cassadine (Marcus Coloma) had been thought dead for several years, and Spencer wasn’t all that happy to see him once he finally revealed that he was alive. Spencer had spent years mourning his father, and the fact that Nikolas hadn’t revealed his presence as soon as he could have, made Spencer quite angry. So it’s anyone’s guess how Spencer will deal with the rest of Port Charles. Some of his relationships in the past were contentious at best.

Spencer and Cameron Webber have always had a bit of a rivalry. Spencer certainly looked down at Cameron as a “townie”. The two kids completed for the affection of Emma Drake (Brooklyn Rae Silzer) back in the day. But with Emma out of town living with her parents, perhaps the rivalry will die down and the two of them could be friends this time around. But more likely, they will be competing over the affection of Josslyn Jacks (Eden McCoy) with Trina Robinson (Sydney Mikayla) as the spoiler.

Although Spencer may be initially attracted to Trina, the fact that he may or may not be responsible for her being covered in a blood like substance at her own graduation party may put at least a temporary damper on any romance. While leads us back to Josslyn.

The fact that Josslyn and Cameron just kissed and seem to be heading toward a romance may bring back Spencer’s competitive nature. He may think that he can win over Josslyn fairly easily. After all, Spencer likely considers Cameron to just be a “townie” still. But he may have his work cut out for him. Cam, Joss and Trina have been through so much over the last few years, that Spencer may have to work that much harder to either get Joss or Trina to pay him any attention.

General Hospital Spoilers – Will Spencer Cassadine Play Dirty To Get What He Wants?

It seems likely that Spencer is the stalker who has been tormenting Ava Jerome (Maura West) and Nikolas the last few months. If that does indeed prove to be the case, he will likely play dirty when it comes to romance as well. Look for him to do some dirty deeds to Cameron over the next few months to make him look bad. But he had better hope Laura doesn’t find out what he’s up to, or he just might be in a world of trouble!

Will Spencer continue to think of Cameron as nothing more than a “townie”? Will he turn his attention away from stalking and toward romance? Will he catch the eye of Trina or Josslyn? Young love is never simple in Port Charles so stay tuned to General Hospital airing weekdays on ABC. And don’t forget to check back right here regularly for all your General Hospital news, information and spoilers!